TheDonald
Communities Topics Log In Sign Up
Sign In
Hot
All Posts
Settings
Win uses cookies, which are essential for the site to function. We don't want your data, nor do we share it with anyone. I accept.
DEFAULT COMMUNITIES • All General AskWin Funny Technology Animals Sports Gaming DIY Health Positive Privacy
904 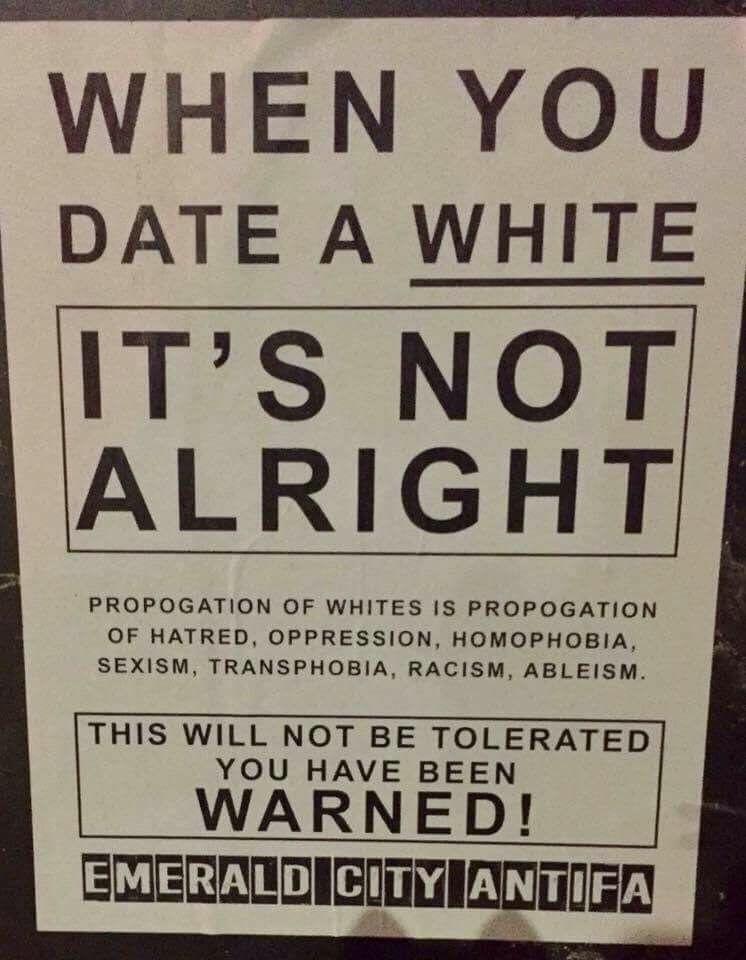 Only when they need to be.

Some are some arent.

How many Rittenhouse attackers ended up being jewish? All 3 I believe.

One was only disarmed.

He was allowed to live so he could tell the tale.

And do you think they were all in on the plan or useful idiots? Antifa is openly communist atheists or luciferian. And really really fucking stupid.. BLM is the propaganda, Antifa is their brown shirt thugs.. they are pawns 90% of them worship themselves and will tell you all about it

I lived in portland during the riots.. they were white

Pede... the noses are not boots on the ground. They are the manipulators and pencil pushers tricking the useful soyjacks

'you have been warned', what are the soy boys going to do about it? Screech and ree and shit their pants?

They are going to call their girlfriend's black boyfriend and tell him to beat you up.

They are going to shoot people in the street and be let out on bail by corrupt DA's...we've seen this happen plenty of times in New York and Oregon.

Which kind of proves the point doesn't it... They are hateful little bigots that shouldn't reproduce.

Sad how we have so many useless sacks of shit and race traitors. Libs tend to be midwits, smart enough to be above average, but too dumb to understand long term consequences.

ANTIFA is BLM. BLM is ANTIFA.

The idea that ANTIFA is 99% white is fucking retarded. Only an ignorant faggot would think that. ANTIFA/BLM is more like 80% non-white. Open your fucking eyes. These leftists want to genocide whites.

Must have missed the part where i said i lived in portland during 2020.. eye witness here for over a year

Cool story, bro. The US is more than just Portland. Oregon is mostly a white state. Check out ANTIFA/BLM in other states.

My statement absolutely remains true: ANTIFA/BLM is 80%+ non-whites. So save your antiwhiteism for your faggot Jew friends.

They don’t want want minorities mixing in with them.

Stop noticing you're being genocided, bigot!

White people need to have at least 6-7 White children per couple to combat this. We used to have this many, we can do it again. Also, we need to raise them right.

On UK TV, they are celebrating the extinction of Whites.

Ableism? So...if we get rid of whites, everyone will be equally disabled?

I'm not sure 85 IQs technically count as mentally handicapped, but close enough.

Fun fact, they used to before (((experts))) lowered the cutoff to 70 so that a certain 13% of the population weren't considered almost universally retarded.

These idiots never realize that their rhetoric is soft racism... Toward the group they're trying to "protect."

"will not be tolerated"

Stack up and try some shit then.

Almost wish it was real. Antifa are the equivalent of a very loud chihuahua in need of a good solid kick.

I used to be “oh live and let live we are all Americans” until I realized how much they hate “yt ppl”. Until they shoved forced IR marriage shit into every advertisement. Until the nonstop barrage of anti white sentiment.

just to clarify, its dem fake jews. 1/2 of the elite are not the jews from your Bible

The commies and the globalists want you to hate Jews, and other minorities. While you’re occupied in senseless race wars, they’re taking over. Congrats, you’re being played, by one of the oldest ‘plays’ in the book.

Diversity does not work and never has in history

We are already in a race war and they’ve already taken over. Whites just don’t realize it

Go on believing it’s the heart of someone’s character all while they view you only by your skin color. You’re playing two different games here

Thanks for enlightening me!

Are they “literally bred” for that?

One day you’ll thank me for real

by this tard-logic everyone before the 1950s was super-woke

Yes the southern Democrats of the 1950s who wanted to continue segregation were woke.

They thought the color of one’s skin was more important than what one could add to society, just like modern Democrats.

And you're playing faggot.

Most of the throw-outs were based on the fact that Jews would not convert… or blamed for disease they had nothing to do with (Black plague), or blamed for banking (which Christians were not allowed to do, so Jews were invited to do it in the first place). is that anti-semitism?

By the way that plan always fails, and it’s not because the Jews are so smart or powerful. It’s because by the time a society is blaming Jews, they have to neglect half of reality, and accept lie upon lie, and in that state of false world view, they are incapable of making good decisions (typical for Leftists, think BLM and feminists). And this leads to failure.

The torture and murder of Jesus Christ

Lol dude. If Jesus wasn’t tortured and murdered, he wouldn’t have been the Messiah and Christianity wouldn’t exist. If the Jews of Jerusalem had spared Jesus, we’d all still be pagans.

Could that be reality? Or, is there some psychosis whereby that’s the only conclusion the Jew blamer will accept, like a feminist, they shut down rational thought.

Let’s begin with ursury, in Europe, Christians were not allowed to do this, so they invited Jews to do this for them.

“The entirety of the Weimar Republic”. The massive screw up concessions post WWI by the Germans were the Jews fault?

“The majority of cultural degeneracy throughout history”. That’s too broad to lay blame.

And about writings. Sure, in the 25,000 pages of Talmud, there are going to be some nasty things said about non-Jews. But Talmud isn’t a book of laws. It’s a record of free debate, the bad and the good. Sure there are bad things there, but I’m sure there are also good things said about non Jews in response. And another thing: what religion doesn’t say negative things about the other? Even Christians had been at each other’s throats for centuries…

And finally, the definition of insanity is trying something for the 110th time that has failed 109 times already. Lol. It isn’t because the Jews are so strong, it’s because you hold a world view that has to ignore reality, and believe lies (like Leftists), and that’s no way to succeed long term.

At last, a message I can agree with

I think you have the exact opposite of the purpose of this. Antifa is mostly white. They are encouraging race mixing to get rid of white people.

as if I needed another reason to want antifa literally wiped off the face of this planet.

And fuck my autocorrect constantly trying to capitalize the “a” in antifa.

Big tech soyboys are a petty bunch aren't they?

Antifa wants only non-whites? Seems like the problem is gonna fix itself.

It's no surprise those Antifa retards can't spell.

“So anyways, I started blasting”

Lets offer everyone a one way plane ticket to South Africa.

I see a time in the future when the last handful of white people left on the planet are hunted down and slaughtered, there might be a few non-whites trying to protect them but the majority of the savages will over rule them and finish the whites off. we will all be long gone by then, but holy fuck we’re just gonna let it slowly happen.

Definitely for Whites in West who have sang along with their own destruction.

Unsure if the Whites in Eastern Europe are going to play along. Slavs are a different breed.

Date who ever you want just not kids

It’s like the old saying goes, “once you go black…you become a single mom.”

Emerald city is absolutely full of nerds, prudes, drug addicts, Mormons, and alphabet people. It’s the most sexless city in the USA.

Somehow, the left doesn't have a problem with this blatant racism.

Meanwhile, if the poster said that about black people, the whole nation would hear about it and the city mayor would send a swat team to tear down the posters and arrest whoever put them up.

imagine if these a-holes got a real dose of hate, sort of like the reward for useful idiots after communists are installed.

Should just boil down to ruining the life of anyone who identified as antifa.

You really need an imagination. The authorities are not on your side.

It doesn't make me tired. It just makes me more angry.

I'd rip that sign down and then take out whoever shows up to replace it.

Also once a black and a white person have sex the left immediately claims ownership of the resulting offspring by saying they are 100 percent black. Hell this happened to Talcum X like 40 straight generations, he's whiter than Ed sheer an and he still acts like he's kunta the oppressed mythological slave. Racist shit like that is sickening

Troll post but I don't blame you for getting Poe'd

Although wasn't this a 4chan troll mission? This looks familiar

Then do something about it.

And yet for some reason they’re astonished that white supremacy may be in the rise...

Lads, fuck em all. Be proud of whatever race you are. Enough of this nonsense. Mixed race people be like..

This is actually a hate crime.

To be convicted you need to actually hate crime.

Their own logo is white on black.

Just try to stop me.

The pedo who made this flyer is white. Nearly all of them are. Bunch of racist morons who late themselves.

Lol, Emerald City Antifa is the Seattle contingent. Deep in the heart of Whitey-land.

Seattle is only almost 60% White. And the state of Washington is about 64% White. Also, a lot of Whites there are self-hating and I don't consider them White.

You shouldn't be fatigued, you should be empowered.

So identify as white to keep liberal gold diggers away.

I know a white person didn't post this garbage. Get over yourself, no one cares about your sorry asses. This has nothing to do with skin color, it's about character... for which you have none.

You might not care about race but the people who want you dead do.

This can't be overstated. If you're the only one "not playing the game" you're losing.