TheDonald
Communities Topics Log In Sign Up
Sign In
Hot
All Posts
Settings
Win uses cookies, which are essential for the site to function. We don't want your data, nor do we share it with anyone. I accept.
DEFAULT COMMUNITIES • All General AskWin Funny Technology Animals Sports Gaming DIY Health Positive Privacy
1361 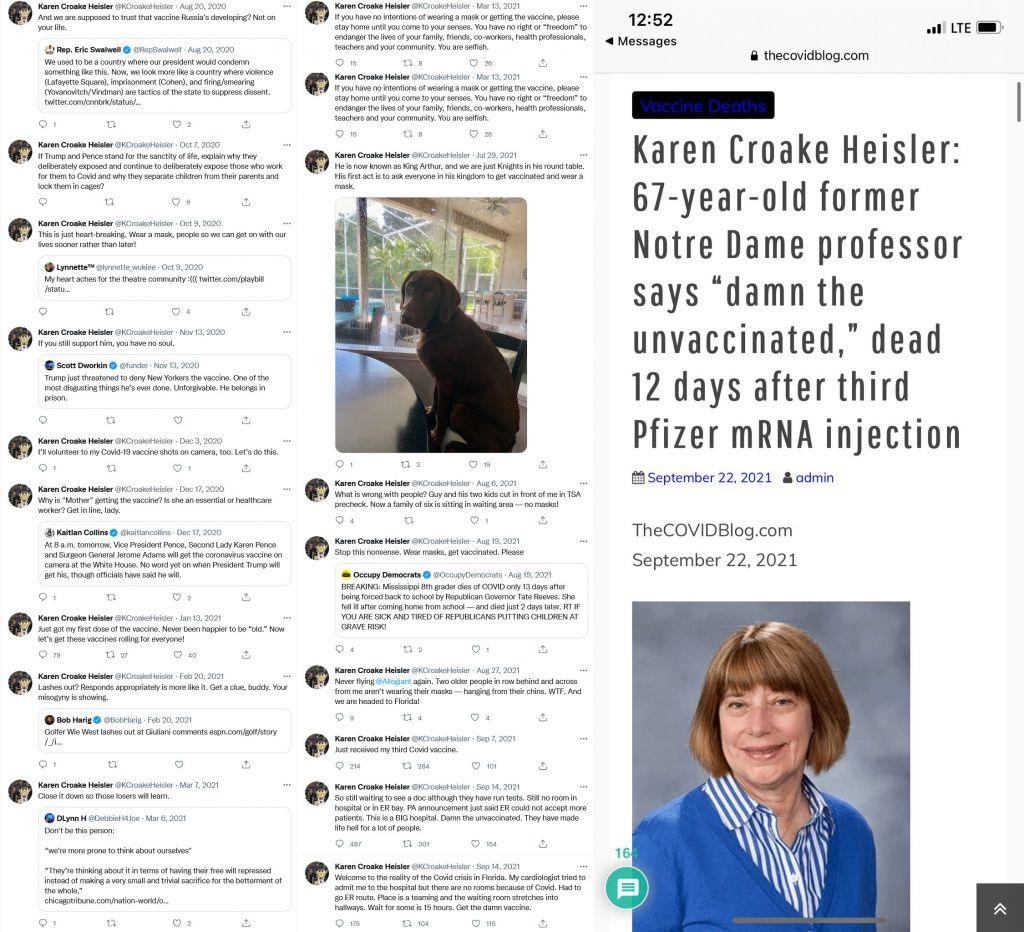 It could of been "SO MUCH" worse.

The jokes write themselves sometimes.

Or "could've," which is what we are really saying when many people hear "could of."

Could not have turned out better for us.

Yup, we could still be hearing from this “woman”.

It would have, she'd probably still be alive.

I wonder what percentage of vax deaths include TDS?

The irony is that only now (after her death) does she realize her errors. And it's far too late to do her any good.

Oh her deathbed, she held the doctor's hand and said, "Could you take back the vaccine?"

The doctor patted her hand and said, "No."

I would expect her to ask for more jabs.

I don't think so. She checked out still blaming the unvaccinated for her illness.

That's not what I meant. There is an afterlife. I have been able to hear, occasionally see, and always feel, the "departed". After death, they get to see both sides of an issue -- and there are often regrets. But generally, they are unable to reach the people they'd want to apologize to so they have to wait until the other person joins them on the other side.

And no, I don't do readings. It's creepy when it isn't a family member.

How is it you can do this, is it something you've learned or something you were born with? You should provide one free reading to all frens!!!

I've always had a problem with this. Sorry, but I don't do readings. It scared me too much when I was a child and I'm only able to remain unterrified if it's my own dead relatives.

Keep 'em coming! Thinning out the herd of crazy leftists one by one.

It's natural to feel that way since we all have first hand experience.

No. You're really wrong. You just don't know you're wrong.

well how many times have you died?

Climate change. Gamergate. Tax lowering. Winter of death. What else has killed me? Oh! Jan 6.

How many conversations have you had with the dead?

That doesn't describe the reality of the situation.

Let me put this in perspective for you. The average human being hears sound above the range of 20hz. My hearing has been tested and I hear below that range by a good 10 points.

I DO NOT think hearing the dead has a damn thing to do with "spiritual gifts" unless you want to consider hearing better, and perceiving things at levels other people do not are some sort of "prize".

I think I hear them because I can hear "better" than most people can. It's a sensitivity that, at times, is frankly damn annoying. It scared the crap out of me when I was a little kid and took me until I was in my mid twenties to deal with these things.

Now I am sorry if this rocks what you learned in Sunday school but there is an afterlife. The dead have nothing of great importance to say. Some of it is just conveying their love, some of it is apologizing and asking for "forgiveness", and once in a rare, rare, rare instance they will tell you something you really need to know.

I don't care if you believe me. If you want to believe you're food for worms when you die, be my guest.

Your are probably schizophrenic.

They will quickly change their tone when its their turn to pass on and they see for themselves.

Keep telling people the Bible is wrong and you'll get to experience the afterlife from the wrong side. I mean that as a warning, not a threat.

You are completely right about an afterlife and such awareness I used to think was a curse. Now I realize its a gift because you know absolutely and totally that this life is not all there is to existence. Where you go with that awareness is up to you, but the experiences usually leaves no doubt that there is a parallel spiritual component to our material lives.

Well obviously didn't lose much here. She was a professor at Notre Dame yet does not know the difference between "teeming" and "teaming". What a dumbass. I mean seriously, a professor at one of our better colleges and she spells like a child. Enjoy Hell bitch.

It’s hard to feel bad for these evil and very dumb motherfuckers .

Ugly as fuck too

Beauty might be only skin deep but ugly goes all the way to the bone.

“And you, Bessie, are ugly. But I shall be sober in the morning, and you will still be ugly.”

Both Karen and croaked. Somewhere there are digits on /pol/

Remember, these people took your jobs, your kids education, your freedom to express your faith, they even wanted you to not be able to drive on the interstate, be admitted to the hospital, or fly on a plane.

I am going to hold this grudge for decades

Until the day I die I will remember. Forgiveness is for those that repent. But forgetting-ness? Never.

Spot on. I will celebrate the death of every one of the evil cunts that pushed this scam and I will never stop reminding anyone that will listen exactly what they did.

Many of them are desperate to forget it and pretend they never went along with the tyranny. Not on my watch.

Is the clot shot accidentally BASED? Killing all of the most loyal and foolish leftists, while leaving the smart conservatives alone?

Trump IS A MADMAN. Generationally wipe out looney leftists.

He should actually campaign against the clot shots so the rest of the TDS dumbasses will finish their doses in defiance.

Unfortunately, the number of pedes killed by covid probably evens out the losses the dems received from the clot shot.

Yeah, uhh... no. I don't know where you're getting your numbers, but they're way off.

Covid did not kill that many people, and also dems died from covid as well at a higher rate.

I know of many people killed by blood clots, I only know of maybe one or two conservatives who were very old to begin with who "died" of covid (aka, died with a positive PCR test)

I know the numbers were skewed heavily and covered up, but many people still died from Covid. Normal, healthy people. The spike protein doesn’t discriminate, wether in the clot shot or the virus.

I’m amazed that the vaccine brainwashing overcame their tds!

Burn in hell you commie bitch

only good commie is a dead commie.

With her gone her depressed looking dog should recover.

The cats can finally get out of their sweaters. And no more salad.

Mods: I thought we had a No Refunds flair..? Can we? Very useful as time goes on.

OH NO! We'll have to have a Bernie Sanders picture with it...

Of course it's a Karen.

I love a happy ending.

Take the vax, pay the tax

There is something satisfying about saying "I told you so," to Clot Shot Karens who have caught their 3rd round of COVID and are experiencing unusual medical maladies.

karen 'CROAKE' heisler ... lol that was one ugly cunt or an ugly tranny cunt.

My favorite comment from that is her saying we are supposed to trust the russia vaccine? not on your life. Not on yours either apparently KEK

Im telling you guys, hear me out i think the lefty problem will solve its self just keep them boostered up

Have to wonder if that Karen did any work since she discovered Twitter.

The vaxx is working

She is survived by her cats

We are all better off with that cunt decomposing in the ground. Luckily we won't see her in the afterlife....unless we look down.

"Brought to you by Pfizer"

Her middle name tho 🫢

It was her haircut that killed her.

Good. I’m tired of hearing these people complain I used to think I should care. Hopefully her parasite dies with her

12 days after. You guys realize they will count her as “unvaccinated”?

i see someone who got religion, the covid cult, and took the sacrament 3 times

Should have never been allowed to have this beautiful dog. What AWFUL cunt.

It should be noted that she had cancer and it went into remission, the cancer returned in late 2020.

You love to see it.