TheDonald
Communities Topics Log In Sign Up
Sign In
Hot
All Posts
Settings
Win uses cookies, which are essential for the site to function. We don't want your data, nor do we share it with anyone. I accept.
DEFAULT COMMUNITIES • All General AskWin Funny Technology Animals Sports Gaming DIY Health Positive Privacy
2501 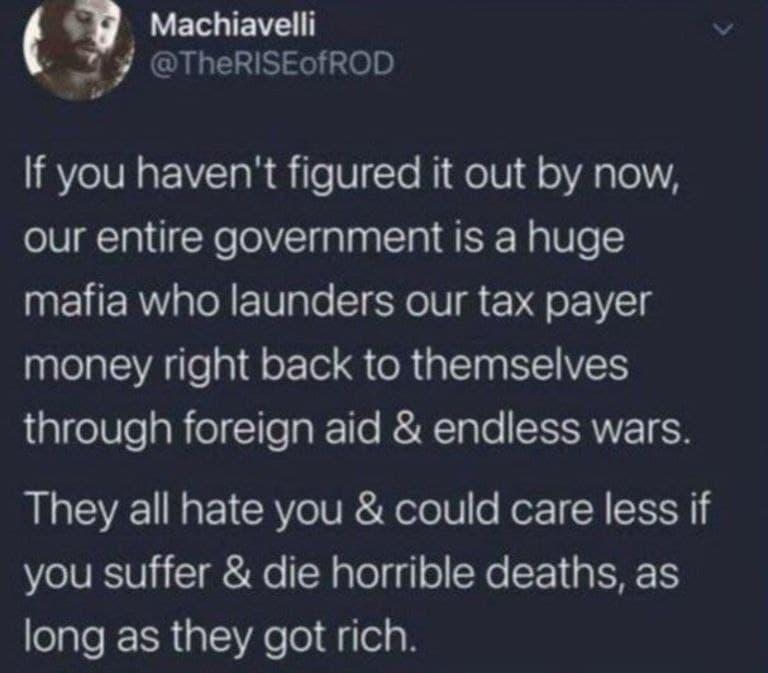 This SHIT has to end.

I don't mind paying $5 to go fish in a man made lake or $10 to camp at a clean site with toilets and grills. Yes there's a lot of unnecessary taxes but fees for use i understand.

What you say makes sense.

The money goes to create the man-made lake and staff the premises.

However, the politicians abuse it. Give them an inch, they'll take an ell.

Then charge them with treason.

And sell seats to their sentencing.

I have children and grandchildren who have to exist in this new "Third World Shit Hole Country" - because you were a pacifist. "Genius" . and "YES" they are also average white boys.

so do i but raging on the internet and creating division while you latch on to small untruthful ideas is going to go far for them. "Pacifist" ?? show me how its done. Im not good at following directions and i will not dive on a grenade for somebody who claims red but acts blue.

You willing pay a "$$$FEE" - while certain people who immigrated here illegally ( fucken border jumpers ) get free food stamps / health care / Cel Phones / the list goes on - - - "ALL" from your taxes. "YOU" my friend - are a moron for making such a comment. The Cabal is raping you / me to the loss of the good ole USA. And your "ALL FOR IT" ??? What a PATRIOT .

My comment has nothing to do with what your describing. I am against taxing Americans on goods and services and especially our income.

Indeed. They should be banned in principle, but to add to the reasons, sometimes you're not even able to buy insurance that you're legally required to have. Anecdote time. Recently when I moved to a service apartment which also has a hotel section for short term guests, and my car insurance said they didn't accept my address because they considered it a hotel and refused to offer insurance. The thought process of the helpful gals on the phone was I just move out and rent somewhere else. I explained I had already paid for about 10 more months and what a huge waste of money that would be and they thought that was a cool story and said bye.

Always brings me down when i see this and visa versa

THANK YOU!!! Why do people get this wrong? It's not hard.

Have to give my Sweet Husband the credit for explaining the difference to me.

Thank him from me :P

(((THEY))) are the real victims, doncha know fren?

It is facilitated by no term limits for them, they set themselves up each term to steal more and more.

2, 4 and 6 years with several month legislative terms made sense when all we had was Horses. They were meant to basically have no time and no ability to build anything up. We need to drastically shorten terms and the session down to 1 month.

The USC is already a weapon against the people. At this point, it needs things removed, not added.

Sums it up well

No it doesn't. It doesn't explain why White people have suddenly decided to replace themselves, hate the White identity, import tens of millions of non-whites, and give all benefits in society to non-whites.

They and their families need to be stomped out.

I hear fire works well for that.

At least Mexico is honest about their corruption.

Honest/Corruption??? That is an oxymoron if I ever heard one.. Mexico is heading into another spree of revolutions and turmoil they haven't seen in a long while as the drug cartels vie for power in the Narco State we call Mexico.. Just maybe back in the late 1840's when we occupied Mexico City, we should have just claimed all of that country as US States.. Guess we could still do that if they give us an excuse today.. Oh wait 1/4 of their population has invaded our country so we do have an excuse..

The only problem with that logic is that the US didn't have enough population at the time to homestead Mexico. If they did then this hemisphere would be a completely different world.

There are two kinds of “Americans” now-

Those who eat delivered meals- and Those who serve them.

(((THEY))) absolutely do hate us fren. Obviously you’re not there yet, but you’ll figure it out soon enough.

GET. Present tense. As long as they GET rich.

Wage slavery is FAR more profitable than whips and chains.

They don't need wars. It's vital people understand that the central bankers realized 100 years ago that Marxist redistribution was a much better method for piling up debt, than provoking wars. It's far more expensive, it never ends, and the morons in society actually beg for more.

75% of our federal spending is on entitlement programs. Money spent on redistribution FAR surpasses military spending. And yes, we DO pay interest on it. The PRIVATELY OWNED Federal Reserve banks get a guaranteed 6% interest rate as our "lender of last resort". It's about 100 billion a year. (Not all of the debt is borrowed from them)

Ironically, the wars they get involved in are almost always related to maintaining their reserve currency status. That allows them to offload most of the inflation to other nations. If we were to lose that status, our economy would literally collapse under the weight of its own debt. Of course the debt is caused by the aforementioned entitlement spending.

So when countries start thinking they can trade oil in currencies other than Federal Reserve Notes, the bankers get their mind right with American missiles and bombs. Can't lose that cash cow after all.

No no. Our deaths aren't careless collateral - it's the -goal-.

How could someone so astute and intelligent still be using "could care less" instead of "couldn't care less"? Blows my mind.

No, see, they could care just a tiny bit less, because when you die miserable and destitute they have to step around your corpse, which slightly annoys them, so they do care a miniscule amount that you kind of stay alive and out of their way.

They left out how “health care” plays into the scheme. Trillions laundered through that operation as well.

It’s so weird. Liberals / hippies used to say this. You think we would be uniting right now but most the hippies love the government now. So nuts!

Unity truly is truly Power and Power is what we need to save the world.

Yeah, it's completely bizarre. Everything that used to be counter-culture and stick-it-to-the-man is totally in love with government and the mainstream narrative. The "rebels" now are the folks who believe in two genders and traditional family values.

Could NOT care less

Yes I want one two!

Yes, a long time ago. I've been calling them "DC Mafia" for years now.

Mafia -- Nancy Pelosi's family has Mafia ties. And, they moved from Baltimore to California, where they are one of 4 families that run California politicians for fun and profit.

funny, thats how I feel about my govt. I hate them and don't care if they suffer and die horrible deaths, as long as they leave me the fuck alone. They had control of the steering wheel, they led us here, reap the whirlwind bitches. my country on the other hand, I long for it's return.

Spooner figured it out more than a century ago.

You sure are correct! Only they steal future tax money because our current annual revenue goes to pay the interest on the National Debt. So they launder future tax dollars on borrowed money from the Fed which inturn grows the National debt. Essentially they are laundering money not yet earned into existence.

Sad, but true. We are being governed by mobsters, no doubt about it. This isn't America except in name. The real America died after Reagan left office.

Because the enslaver is also a slave of his own machination. They work harder than us.

They're not indifferent to your death. They're participants in a satanic death cult, and are actively trying to kill you.

There are many who haven't learned this yet

News to me, big wow, I need to reflect on this in my safe space.

Then it's time these faggots get held accountable. Both sides, motherfucker.

Was always this way. But the Sheep are content when you feed them and make them cozy.

Your job and mine is to try and wake people up.

Im not very good at it. They just think im nuts.

There's only so much money someone needs. What do they do with all that money? 🤔

They make more and more enemies so eventually they need to hire entire armies to protect them.

It's the biggest mob bust out in history and they're doing it to our country.

It's nice to know they "could care less" even though I disagree with this statement. I'm sure they couldn't care less.

They do pretend to care though.