TheDonald
Communities Topics Log In Sign Up
Sign In
Hot
All Posts
Settings
Win uses cookies, which are essential for the site to function. We don't want your data, nor do we share it with anyone. I accept.
DEFAULT COMMUNITIES • All General AskWin Funny Technology Animals Sports Gaming DIY Health Positive Privacy
566 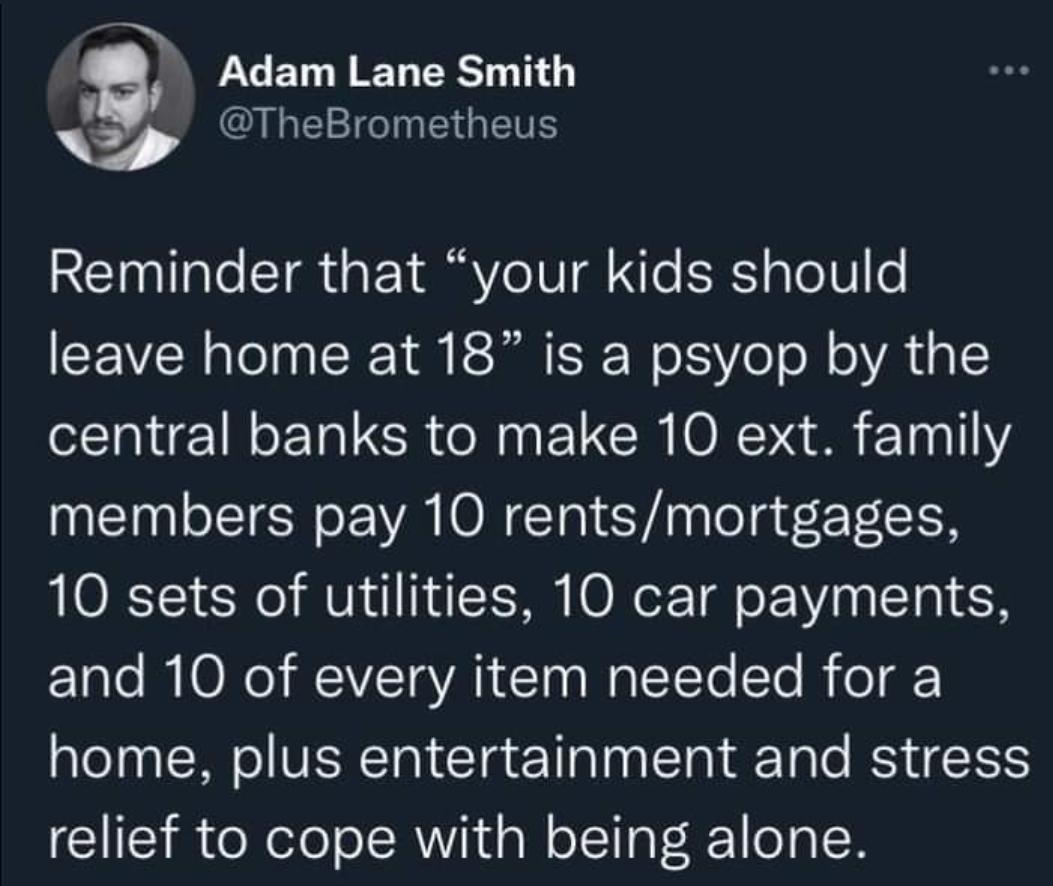 I seem to recall it is not unusual for other countries that family tends to stay together until the kids are married. I am unsure how common it is.

It's common for most of the world.

The grandparents also very commonly live with the parents, and it's not unreasonable to have multiple generations in the same house.

I don't want to live with my parents, lol, but you can see how we've gone so far in the opposite direction.

High divorce rates, children outside of wedlock, parents leaving nothing to their kids, etc. Primarily an issue in Western countries.

That is ONE family unit.

My girls from Brazil, and says that's the norm.

Thank you for the input! I invite anyone else familar with other countries' family culture to join in.

Most Asian cultures are this way too.

You stay in the home until you are married (if you have a job, that money also goes to the home, and you are given a stipend to "live on" by the head of the household), once you are married, you then move out with your wife and start to build your family. The hope is that you have raised your kids (at least to a point that they are financially solvent) by the time your parents retire (and this usually falls on the first born), then your parents move into your household and are supported by you.

A lot of it depends.

You want to get out there at 18 and make your way in the world as soon as you can practically do so. I love my parents, always have but shit - I was chomping at the bit to GTFO of the house as soon as I could - I'd have gone sooner still if I knew about emancipation. Put this way - even barracks life was more private than a house with a shitload of brothers and sisters in it.

Even before the modern era, usually it was the oldest living male who hung around home after becoming an adult - he then brought his wife into the household when he married. Unmarried girls/women also tended to remain at home, but only until they got married.

Everyone else in the house fucked off the moment they reached the age of majority, since it was only the oldest male (and his wife) that inherited the property. In return, the oldest male and his wife would take care of mom-and-pop until they died, at which point he inherited the place. That's been a cornerstone of Judeo-Christian civilization since, well, Judeo-Christian civilization (and even before when it was just Judeo-). One example of this existed during medieval times - Swiss males became legendary mercenaries, but you never, ever found a first-born male among them. The first-born males already had a house/farm back at the Canton and was living in it with their father and his wife... everyone else had to seek a fortune with which to buy their own place.

Christian* fixed it for you.

The pre-Christian Jews were big on first-born inheritance as well (most of the ME at the time were...)

That’s cool, still don’t want their religion tied to mine. Modern jews believe that Jesus is boiling in shit in hell. I’m not down with that.

No shit, jews have no place in this.

I got out at 17 and never looked back.

Recently heard someone complain that these days people build houses for themselves, when in the past they would build a home for themselves, their kids, and their grandkids.

Having three generations under one roof is very common here.

Moving out is something you do out of necessity (job in another city etc.).

Each family is different, but when you explore demography and relevant statistics. The closer the family unit (nuclear and extended) the great chance for success.

Top of the pile by % are the various Asian communities in this country. Very active grandparents and extended family, traditional values (husband + wife), higher birthrate than 2.0

Indeed basement dwellers are the most successful people out there.

My family did something to handle this we each were told to save until we were 18 every penny we had, when we hit 18 we bought a small plot of land adjoining our family, whether it be first cousin, grandparents, parents etc. Then we saved every penny till 25 while living with parents and then bought the materials to build a decent house on said land. Then family would help build it with you in about a year or two it would be done.

I'm a millennial also as of now my generation all have homes on the same section line as our parents and paternal gtandparents.

Before World War 2 multigenerational households were the norm by a very large margin.

some people have more value to stay home for a while, others have more value leaving asap. it depends on the person's situation. is the person's family garbage? is the person unable to leave for some economic reason? stability in the short term is sometimes the safer decision so long as its not detrimental in the long term. i personally am needed by my family helping my dad with his photography business while i get the benefits of not needing to pay rent and the ability to not have to work if i have too much to do for my graduate degree one weekend. especially with how things are right now, it is simply optimal to stay with my family for the time being. im also somewhat essential to keeping everyone emotionally stable.

tl;dr, just do what's best for you. that's not a simple answer.

18 used to be just fine. It's only the last crop.of kids that are too faggoty to do shit for themselves.

18 yr olds in the early 1900’s and before were perfectly capable of self support and did just fine with out mom and dad … now 30yr olds need safe spaces and cry closets!

This is a romanticized view of reality.

People used to have 3-8 kids. Kids used to work for their parents until they were able to go off on their own. The eldest would often take care of the business as their parents aged/died.

Now there's no parents cuz they got divorced, no family unit, and there's no family business, and nothing left to the kids.

"Now there's no parents cuz they got divorced, no family unit, and there's no family business, and nothing left to the kids"

This is the core problem. The problem is NOT the creation of young, capable, independent children.

In the 1890's til the great depression my Great Grandparents worked a farm and caught oysters. When one of their sons started a new family my GG Father and rest of his sons would build a dwelling on the property for that new family to live and to stay and work on that farm. When the Great Depression hit my GG Father had to sell his farmland and most of his children moved to another residence.

There's another reason for that too.

Don't want any familys being strong enough to spawn any dynastys.

and the boomers took that programming hardcore.

It’s not that it doesn’t help the banks and all, but maybe it’s a symptom not the cause? 🤷‍♂️

The right seems to vacillate on this. One year it’s “it’s a psyop by the banks,” another year it’s “get your freeloading ass out of my house you faggot pussy shill and get a job and learn how to fend for yourself like I did when my dad kicked me out.”

Okay but I wanna nail my wife without my adult daughter and her boyfriend being in my home. They can get their own place.

"Don't worry about the strange sounds, honey. That's just me and your mom fucking each other's brains out."

"Don't worry about the strange sounds, Dad. That's just my husband fucking my brains out."

Adam is looking to justify why he’s still living at his momma’s house. 🙄

Pilgrim, Your kids that have their shit together and leave home to get a job and build a life have the American pioneer spirit and will do well. Confidence breeds Success.

That's just part of it.

People only started to move away from home as a rule around the beginning of the 1900s.

1913 the power of attorney (birth certificate) was given to all sovereign born in order to get around the 13th amendment and install a labor tax. Shortly after that WW1 depreciated the dollar and women had to get jobs and pay income taxes. The kids lost their teachers and began to go to public schools.......

I want out of my parents house because I'm not in Texas and I want to be in Texas. It's very different.

nahhh i dont know. that tradition didnt start in modern times, although i know some cultures are very family oriented.

Fuck that! Get out or start paying rent!

Quite the opposite. The goal of keeping kids at home as long as possible is to create an entire generation that's 100% dependent on Big Brother once mom and dad die.

That's all fine and good, but the idea that moving out when you're 18 is a psyop -- THAT IS STUPID.

Capitalising stupid does not prove your point.

lol look at you retards falling for the "and you'll like it" part.

indeed, they do it in europe!