TheDonald
Communities Topics Log In Sign Up
Sign In
Hot
All Posts
Settings
Win uses cookies, which are essential for the site to function. We don't want your data, nor do we share it with anyone. I accept.
DEFAULT COMMUNITIES • All General AskWin Funny Technology Animals Sports Gaming DIY Health Positive Privacy
1645 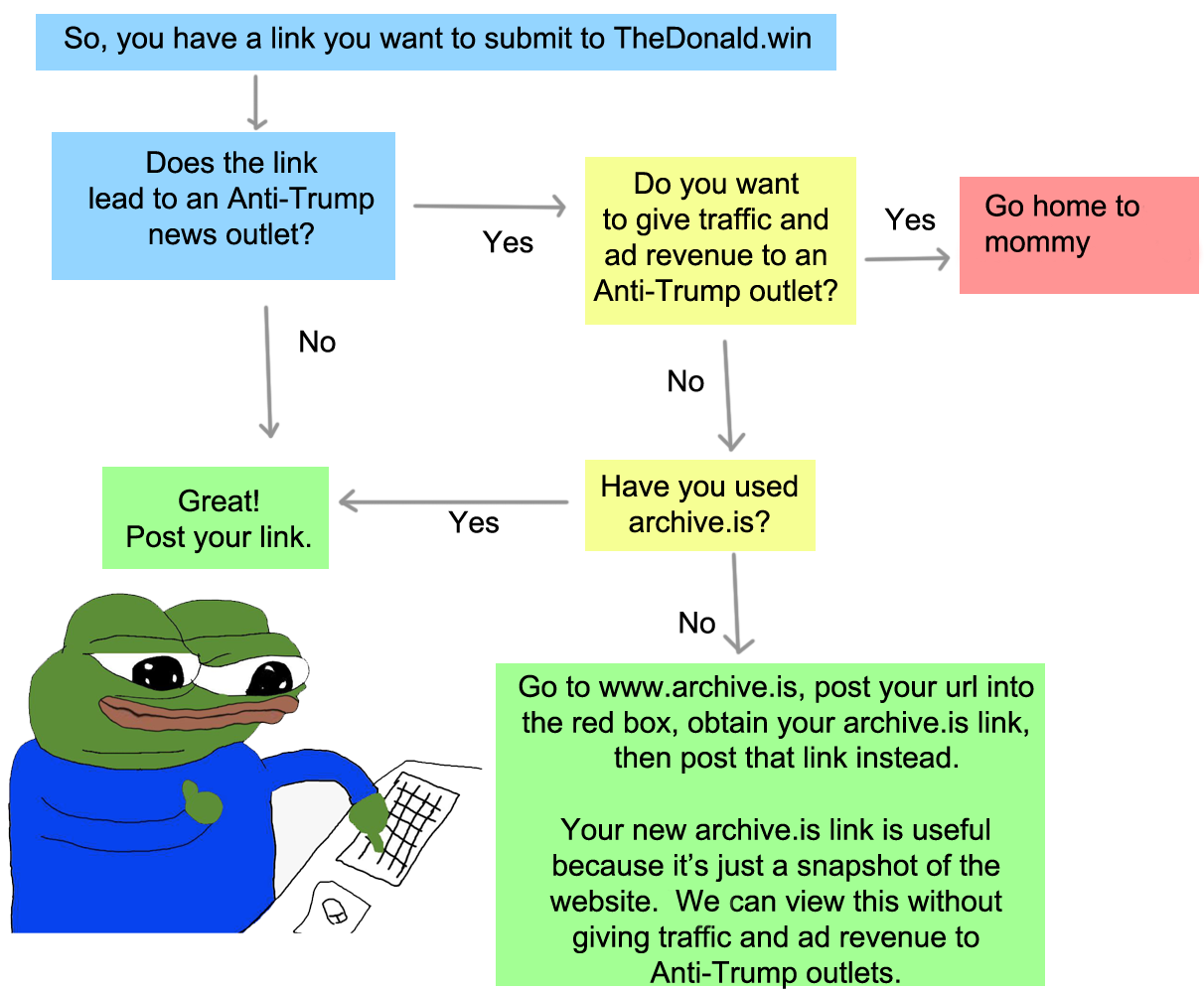 Please start doing this with FOX links. They are not on our side.

Any site with Google analytics and Facebook ad pixel is not on our side. It’s tracking software that can and does track your activity online.

I use my pihole to block that garbage.

Also use Searxng for your private search engine aggregator. Fuck all search engines with their paid advertisements.

So, 99% of all websites on the Internet. Hence my advice to use javascript and ad blockers with a good VPN instead.

This is gay and lame. If you don’t click ads or buy from their advertisers, it’s more effective. In fact, go to globohomo sites, click all the ads and then post a boycott post for the advertisers here. That would actually have an impact.

I came here to post this too. Good job patriot.

I don't trust anyone on network news, period.

This should be stickied for a month.

And a link to that archive site should be in the sidebar at the top.

Link to archive sites should be part of the New Post process. Put them where the pedes need them.

For those in this thread looking for a hyperlink:

There is also a link there to their Chrome extension.

I block ads and telemetry at the desktop and router levels, since nothing is 100%. Also, every computer I can get away with has Linux instead of spyware infested windows. Every month I block hundreds of thousands ads and data points. The internet becomes so much faster when your browser isn’t spending so many compute cycles spying on you.

Read about AdGuard and Pi-Hole if you want to set up a similar setup for your home.

The internet becomes so much faster when your browser isn’t spending so many compute cycles spying on you.

There's also like 95% less distracting, animated bullshit taking up space on webpages trying to sell you shit you don't need.

I've been using adblockers for well over 10 years back when adblock plus was the only one available. Every time I do a fresh install of windows and browse for drivers I am shocked how much of every site is littered with ads, pop ups, and animated banners and fake live chat help bots. I don't understand why everyone doesn't have an adblocker installed.

Seems like they should make a browser plugin or something so you don't have to go to their site to get the link. Reduced steps will increase use exponentially

Maybe. At the same time how hard is it to write nitter.net instead of twitter.com in the URL?

I don't think it's about difficulty, people are either lazy or ignorant about it.

It's called an adblocker. Been a thing for ages now.

How does an ad blocker archive a site for you?

Edit - I suppose it might help with not giving them ad revenue? But isn't the point of archiving to also preserve the page so the commies can't change it later?

How we gonna win a digital war when we still giving clicks and ad revenue to the Enemy of the People?

You don't need to use an archive site when you can save as html or screenshot.

Or maybe there's a browser plugin that just prevents ads from ever being loaded.

If such a thing existed, it might be called "ad blocking". There might be a specific one called "Ublock Origin" that works great, in this hypothetical universe where ads and other internet trash can be easily blocked with a plugin that takes like 2 clicks to install.

They have them. Just search your preferred browser plugin repo.

There is a nitter redirect plugin

I mean alternative technology and everything is fine, but the eyeballs are still on places like Twitter and Facebook and Instagram and TikTok you're gonna have have to keep putting memes in material out there for most of the eyeballs to see most of the eyeballs were trying to convince are older people who aren't very Tech savvy and just learn how to use those other platforms they're not gonna want to use a new platform. Can't go and entirely leave an enemy's platform because then you're basically forfeiting most of your audience to just what the enemy wants to put there there. That's why we had to stay on reddit until the bitter end because because otherwise we were pretty much conceding that we were gonna go run away to our own little corner of the Internet and we weren't gonna be a bother to the normies anymore

I have an idea that aligns perfectly with your logic: you should stop wasting our time here and go back to rEdit.

This is my impression of you.

Hey guys! lets make everyone who doesn't agree with us leave while we circle jerk each other in our echo chamber!

These are just links...still know a lot of conservatives who hate where the country is going, ex-military etc. and they still post non-stop on Facebook.

Just look at the amount of direct Twitter links and screenshots around this place.

Still plenty who watch football, buy everything on Amazon and watch Netflix too.

I used to argue that it is important to break up that echo chamber but the reality is well over half of the users over there are either bots or paid propagandists and the rest are a lost cause.

This is awesome. Also, since these websites are enemy of the people, what’s to stop them from handing over IP/MAC data from traffic originating from the Donald, for your safety, don’t even click links to enemy sites.

This should be stickied forever

Thanks. This is very helpful.

Why don't you just send them cash instead?

You do know that when you use adblockers on those sites they don't get clicks or ad revenue right?

Sites that do deserve the traffic also don't see clicks or ad revenue, because weak minded people have been conditioned to use only Swamp sponsored sites.

I used to love this place, lately not so much. I'm really tired of all the brain dead idiots that think their doing something useful by spending time and posting on Twitter, youtube and Facebook.

On iPad, all you have to do is double click the url of the page you want to capture and click copy. Type archive.is, no deleting required, then paste the copied url into the box.

No retyping or deleting anything. Instant Copypasta. 🍝

I bet other devices are equally E-Z!

Archive has been working better on mobile devices too. There was a brief time where it wouldn’t work for me.

Doubly important for social media. I would be glad if we had a moderation mechanism so that a link to enemy-controlled social media must be approved before it is visible to others.

Trump supporters and grifters go to enemy controlled social media for content. Instead we need to make it so that they come to platforms which are open or controlled by us for content.

Thus should reside in our home me page

Thank you pede. I, and many more, were not wise to this. Although I've never posted a phaggy link - when i do, will surely comply with this.

It's also useful for, well, archiving. Commies love to quietly edit shit and pretend they were never lying about something when exposed.

If everyone would do this, it would also out the shills. Because they wouldn't do this.

From all of us that are technologically challenged, we (I) thank you!

I don't know much about coding but if it's possible there should be a black list of sites that if someone tries to post it here it will not allow it and instead make them use that site or one comparable.

Easier and with more benefit to end users:

Now every link you follow blocks ads, invasive scripts running on YOUR CPU, and fools geolocation/meta analysis of your traffic.

I wholeheartedly support not being a moron.

"Clicks" aren't worth anything in the current year, it's all impressions and click-throughs. If you block the ad, no impression. If you don't click, no click-through.

RUN AD BLOCKING everywhere you dumb fucks, it makes the web better and you'll thank me. It also mitigates a malware vector, that stuff has been deployed via ads because ad companies don't really do much due dilligence on technical security regarding the ad material uploaded to them to serve.

Ublock Origin covers the basics well. Add in Umatrix if you're a paranoid nerd that wants granular control of script/resource blocking at the cost of pretty much breaking the web until you allow scripts for individual sites.

Thanks for this. Forgot which site it was and posted a video from FB here.... to only grab the video via 3rd party and upload to Rumble. Archive is so much easier.

What a great flow chart. Thank you, fren.

Even more importantly, the page is preserved in its original form. Changed headlines, articles, and pulling pages down are common tactics that are easily thwarted by archive.is

This should be in a "Resources Section" in the right hand column of P.W

Another good technique is used by Ace on the Ace of Spades blog, who frequently posts copied-and-pasted quotes of the relevant parts of articles he writes about on the blog, which falls very well under "Fair Use".

It's archive.ph now, not sure when they made the change.

I've been yelling about this for well over a year and people literally get butthurt when I tell them to stop going on fucking CCP-controlled reddit, but they never listen.

Most of you all have zero self control and this is why we lose.

Man, Archive never freaking works for me on my phone. Sigh.

Great, but it’s too time consuming for most people to adopt quick enough... Someone should code a simple and free program to automate it!

Excellent point. This also helps if you are on a site that has a paywall. Post your link to archive.is and then anyone can read it.

Thanks, i get lazy sometimes. Need to do this more.

You forgot to mention using adblockers denies said ad revenue. I'll post what I want thanks.

Reminder. Trump is banned from all social media.

Google and Apple listen to our phones and track every location we are at.

A few hundred clicks to normie sites are pennies to a billion dollar company.