TheDonald
Communities Topics Log In Sign Up
Sign In
Hot
All Posts
Settings
Win uses cookies, which are essential for the site to function. We don't want your data, nor do we share it with anyone. I accept.
DEFAULT COMMUNITIES • All General AskWin Funny Technology Animals Sports Gaming DIY Health Positive Privacy
1543 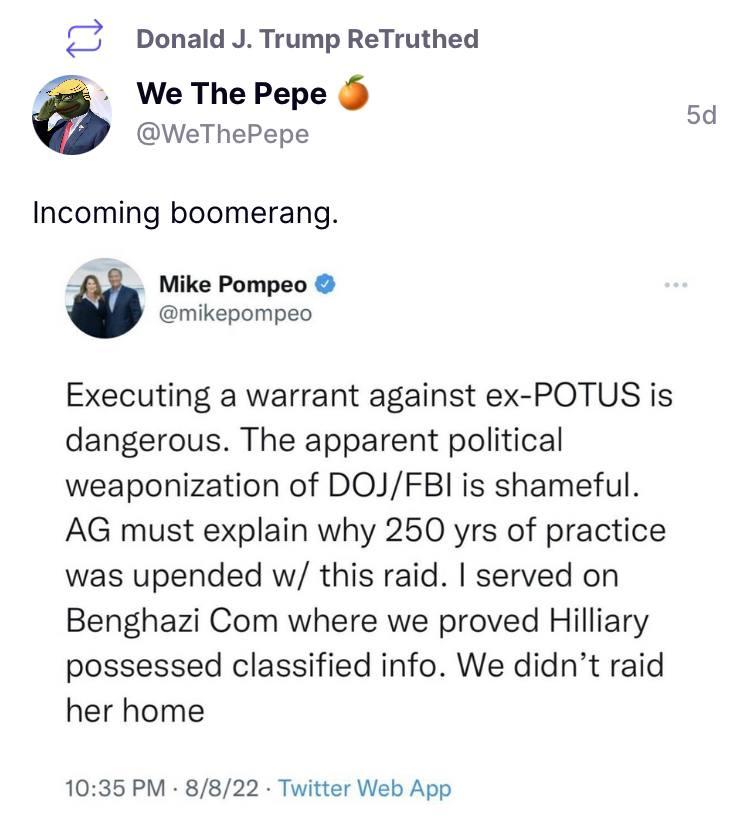 Pompeo is a traitor. He is CIA and has a full hard-on for Julian Assange. This man is not good news.

Didn’t he shit on the Jan 6th political prisoners?

He can join Pence on the retard ballot.

There's still the backstabber role and as always the litany of grifters.

Just what we need, another CIA President.

Pompeo hates Assange and that is the main reason I could never support him for a POTUS run, although I do like his demeanor/public face and thought he was a decent SoS

I really liked his politics too. What's happening to Assange is ridiculous. I distrust both he and Snowden. That doesn't mean the crimes they exposed should have been ignored. Disgusting.

Why do you distrust those two? I see them as heroes. I wish we had more people like Snowden exposing the practices of our tax payer funded surveillance state.

Well, for example Pompeo (and others) say that Assange is a foreign intel asset. He very well may be, I am not his college roommate or anything. Same with Snowden: I buy the whistleblower position and it is a fact the programs he exposed should have led to mass incarcerations. I think Pompeo did a fucking shit job explaining their case and the bastardization of justice is also unforgivable.

I want to see Assange given a fair trial. It is too late to repair the damage done by barricading him into isolation. Or heavens knows what else they have done to him by now.

It is a fact that many of our leaders do not believe in our Constitution. Or many things important to a free and self-governing citizenry. Without a trial I can't see the evidence against either men. And I am no longer interested in what some hack pundit has to say about this or anything else. Pompeo was a spook but he was our spook, and we need spooks.

I do believe in security and secrets but come on: many of the people involved in these two men's names should clearly have been locked up. Instead they are rewarded with big dollars and celebrity status on Twitter.

This entire thing is a fucking scam one way or another and I cannot respect anyone who would say otherwise. Least of all Pompeo, who again I really liked, but I don't trust without verification. Least of all our government which any "conservative" serving in our institutions should agree with and act accordingly.

I'm not seeing that. What I am seeing is shameful and there's enough of that to spread around for years. Our security apparatus is a joke at best and an abomination at worst. They couldn't secure any of our data as it leaked out into .onion sites. It came from powerful institutions that they should have shut down on our behalf for their incompetence.

Again, rewards abound for the loyal.

Wouldn't be surprised if he's a kid toucher. He has that feel to him.

He is CIA and has a full hard-on for Julian Assange.

Isn't this a bit contradictory?

edit: nvm I misunderstood what you meant by that. If he went after Assange that makes a lot of sense.

Came here to say this.

Again, “should have” is a conservative belief based on our conviction that truth is not relative—it is handed down as an objective value by an all-powerful, omniscient Creator.

The opponent does not believe this. They believe in moral relativism—that truth is a function of their desires and can shift at a moment’s notice to further their goals of acquiring total power.

Pompeo did not raid Hillary’s home because he is a moral relativist. He does not have unchanging values that are based on a concept of universal, objective truth.

No, he didn’t because he didn’t have the authority to have her raided, in any of his positions.

What he DID have the authority to do LATER when he was eventually secretary was to release evidence of her corruption, which he didn’t do and even though he bragged about it.

So I fault him for that but not for her magically being able to somehow have her raided.

Now, Comey, Sessions, Barr, they probably would have info on that.

You're right but our resolution here is getting people who are willing to enforce the law and obey our Constitution. It isn't that our opponents are lying unethical dirtbags who love money, power, and station more than grandmas in the heartland. It's that our own people sat on their hands while we became corrupted. We don't need more laws we need the ones on the books enforced.

Hunter Biden clearly should be behind bars right now. If any President before this era had literal kompromat exposed on their son they would have resigned. Clearly our opposition is dishonest, amoral, and therefore tyrannical. The solution is to route them out and lock them up in front of their "peers".

And she wasn't even POTUS, fuckn gastapo

We didn't raid her home

The fear of Arkancide is strong with this one

The fear of Arkancide is strong with this one

No fear required when u already play on the same CIA-sponsored team.

Thus, Pompeo is dishonestly (and he knows it) equating what she did with Trump keeping classified papers in a safe. Which is where they are supposed to be kept.

Maybe you should have. Then actually charged her with a CRIME.

At the time, Pompeo was a republican house representative from Kansas ie a member of the legislative branch. This branch has the authority to investigate. If the find things they believe are crimes they refer what they've found to the DOJ/FBI.

Why? Because only the executive branch ie DOJ/FBI has the authority to enforce federal laws and prosecute those who break the law.

Who was the head of the executive branch ie POTUS at that time?

Understanding the " rules of the game" and the real "lay of the (swamp) land" helps avoid being damaged by this psywars 24/7 psyop attacks on hearts and minds.

Fwiw, I'm not a Pompeo fan, especially for POTUS or VPOTUS, but do I believe he was useful and still can be if Trumps in charge. Trump understands that sneks can be useful, often more useful than loyal allies, as long as you know they're a snek and know how to handle them. And Trump definitely does.

Well if the door is now open now maybe the FBI should raid her homes.

Pompeo is suspect, but he did come out with the statement how the US had been infiltrated by foreign influenced government officials. He named a list of governors who ended up as tyrants during the covid BS.

Traitor. It’s all a game to these parasites.

Pompeo is NOT you friend.

Sgt Smith committed the same crime Hillary did. Take a guess of the Kansas address Sgt Smith would be receiving mail.

Pompeo is just another Swamp fuck.

Mike is deep state/ CIA trash. Think Fauci and ignore anything he spews

You should have. Not raiding her home bought you no credit with the left and they just went right ahead and raided Trumps. Next time don't be such a kittycat!

Dumb fat fuck. BTW, get off your fucking knees and stop groveling for donations.

"wE tAkE tHe hIgH roAd"

Pompeo is old establishment deep state. He may not be "progressive" like the current DS goons but he is DS nonetheless. He is one of the few that was part of GEOTUS' cabinet that has not been gone after or ridiculed. That alone should tell us more than enough.

Pompeo is a fucking pussy too

In a round about way, the precedent has been set that any previous President can be raided going forward. May come in handy later.

It is more insidious than that. They are covertly rubbing it in our faces: the fact that we are powerless to do anything about the tyranny.

They point and pearl clutch in horror, “do you see that over there, look how crazy it is!”

You agree, a brief commiseration takes place, and after you leave, they laugh at you for being so weak.

Meanwhile, they’re in on the power grab and just as greedy as the leftists, but with aspirations to carve out their own piece of the pie.

Do the " Great and Powerful Wizards " of DC Oz want people to believe that they're powerless? Absolutely.

Explain your power in context, pede.

Glad this "250 year practice" has come to an end. Why do you get immunity just because you were the wife of a president?

Billary and the crew gave the CCP human intelligence asset identities and locations, and Pompeo knows it. The CCP disappeared or publicly assassinated all of them.

The difference being that Hillary was the one that should have been raided.

There is no account of the situation in which Trump wasn't cooperating with the FBI before the raid. Hillary on the other hand destroyed all the info when subpoenaed.

Hillary Clinton was never President. Why did she get this executive treatment? Fucking Pompous Ass

There is always a first time for everything, I suppose. That cesspool of corruption called the DOJ will be fought tooth and nail by Trump. Sadly, the cancer in the DOJ can't be removed or treated.

How much time do you spend creating and sharing homoerotic political fantasies? 😘

see heres the thing...when there IS ACTUALLY OVERWHELMING EVIDENCE OF A CRIME you fucking SHOULD have raided her. they have NOTHING on trump. literally not even a valid accusation much less evidence of anything.

"You fucking SHOULD have raided her".

A rep from Kansas " fucking SHOULD have" broken the law and gone to jail forever?????

Only the DOJ/FBI has the authority to "fucking" raid her.

Reals over feels, when?

no shit im talking about the doj/fbi....maybe wait a bit between smoking crack and commenting on the internet.