TheDonald
Communities Topics Log In Sign Up
Sign In
Hot
All Posts
Settings
Win uses cookies, which are essential for the site to function. We don't want your data, nor do we share it with anyone. I accept.
DEFAULT COMMUNITIES • All General AskWin Funny Technology Animals Sports Gaming DIY Health Positive Privacy
2034 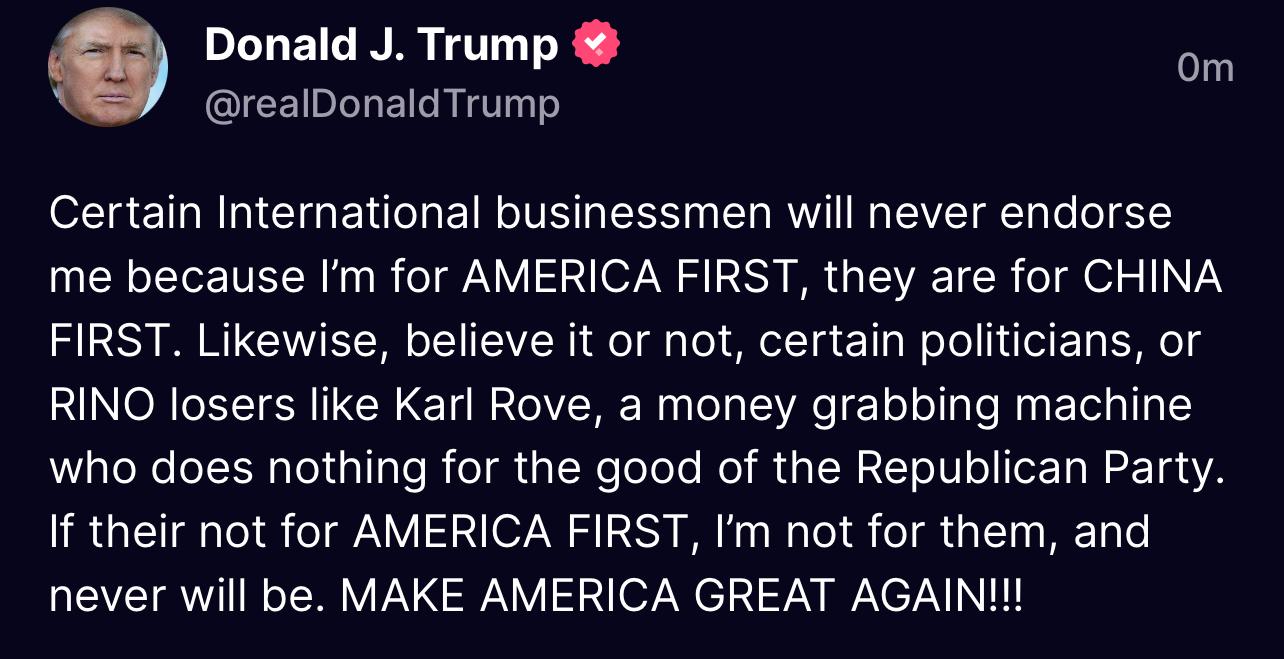 He incorporates spelling or grammar mistakes in each tweet as a show of strength. Libtards can’t help but to comment and spread Trump Truth.

I never saw so much shill thread sliding in my life!!!

Readers, you can skip this comment thread, you won't miss a thing!!!

No he just has autocorrect issues when hammering them out and a lot of times he is dictating to someone else to truth them out. As he has stated he did for tweets

Hammered out your mom.

And then his head

Stop. Just stop. No one intentionally misspells a word. Trump doesn't need to misspell words as a show of strength. It was either autocorrect or (gasp) he doesn't know the difference in the 3 /T͟Her/ s. Quit kissing his ass like that. It's embarrassing. If he wanted to show strength, he would not have signed the congressional budgets. And before you get your ass on your shoulders, yes, I'll vote for him, but he needs to be controlled by us, not them.

I fuck up when I comment on here all time

I know what you mean but he quite literally has done stuff like this for years. Really his whole life when you look back at it. He likes to and is good at playing the media.

No one intentionally misspells a word.

U donut no wat ur talken abaout.

Do you scold your wife for moaning during sex?

that's cute. You think he has a wife.

Me too. It means he's human and not a lizard person.

It is intentional. The typos just get rebroadcast by his enemies in an effort to defame him when all it does is spread his message further into the population. It is actually a genius move. It is almost there is an Art to the Deal. Kek!

This was judas scotts explanation

Just China? I can think of another place that shouldn't be meddling. Ahem, ahem, ahem....

As if he would ever mention israel.

SHUT THIS THREAD DOWN

No, I said israel.

Q said "We are saving Israel for last" --

The thing is, there are Two Israels, There is the one comprised of the descendants of Abraham, and then there is the Khazarian Mafia. The former are actually some good guys and are the ones in our corner who believe in liberty. The latter are the ones who believe they own the earth and we are just dirt. Generally speaking... as community and surroundings have a lot to do with attitudes.

That being said -- I stand by my hypothesis on the "Chosen People" statement in the Bible that God meant Homo Sapiens are my Chosen people, as Homo Erectus and Fetterman's ancestors were still walking the earth. The scribe was Jewish, so naturally he wrote down that Jews were the Chosen people. (only slightly kidding. bring on the tears!)

Yeah, usually “international businessmen” refers to those from a certain other country.

We don’t owe other countries anything.

every american is owed 20,000 a year since covid was released.

Its the new movie: Melted in Manhattan !

That's why he did it. Every time some raging TDS leftist says "LOOK AT THIS MORON HERE ITS NOT THEIR ITS THEY'RE", all they're doing is rebroadcasting Trump's message

I instantly took those words as that. Does that make me an anti yosemite?

Why do you hate elves?

Trump typed it that way. Their must be a reason.

Im with you Trump! Fuck Israel!

Like my daddy always said: If you ain't America First, you're America Last.

I respect and admire you you Mr. President.

Matter of fact Fuck the RNC

its not like they favor money laundering over the Constitution.

I know the difference between their & they’re but sometimes while posting I’ll absent mindedly use the wrong one, then go back later and be like… why did I do that? That’s not the right one!

Trump gone bring that globle warning shee he on fiya!

Check my account history get back to me again

Not a Trump Supporter?