TheDonald
Communities Topics Log In Sign Up
Sign In
Hot
All Posts
Settings
Win uses cookies, which are essential for the site to function. We don't want your data, nor do we share it with anyone. I accept.
DEFAULT COMMUNITIES • All General AskWin Funny Technology Animals Sports Gaming DIY Health Positive Privacy
1890 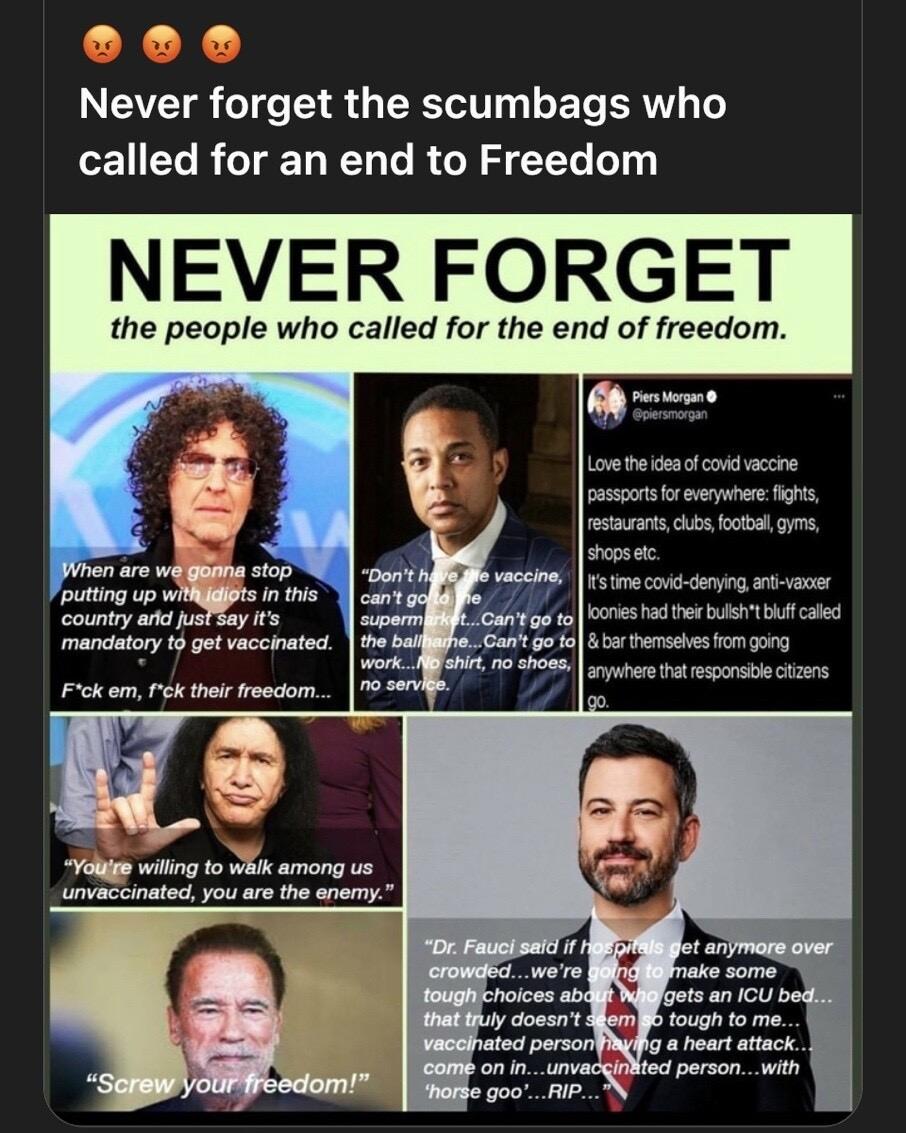 All of them lifelong scumbags.

These people are everything that they claim Trump is. Classic projection.

who did you copy that from??

the only way to stop them is with force. I'm not even talking violence I'm talking government force. you cannot debate them away

you must use the full power of the government to crack down on them and silence them forever. otherwise stop complaining

My status on this (concerns amnesty):

Money changed each and every one.

Money even affected these comments: They were PAID influencers. They took the Pfizer cash before pretending to have hardline opinions about this stuff. In other words, they're accessories to mass murder.

I don’t believe money changed all of them. Take Howard Stern for instance, he was double vaxxed and boosted, yet was still so afraid that he stayed home for two years and did not go out

Every single one was tricked into removing their mask and showing who they really are.

Yeah, but ahhnold broke my heart. I love nearly every movie he's ever done, I grew up with his characters as fantastical role models. And it's hard to watch them now knowing he hates freedom that much.

Not now John we gotta get on with the film show.

Who cares what its about as long as the kids go.

Yup, we need to realize that an actor is not the character he plays. Sean Penn, Jack Nickelson and many others were great in their roles but scumbags in person.

When I went to the movies, I mostly thought about the character and not who played them.

So many in the music industry who were anti-establishment hero's are now part of the3 establishment.

At the 2020 DNC the Black Dude butchering What its worth while Crosby played guitar took the cake. Of course some are duped, threatened, or blackmailed.

The Arnold one got me too. Very disappointing.

He didn't say "screw freedom". He said "your freedom."

Not a fan of any of them.

Gene Simmons is a Drag Queen

Was Arnold always scum? My impression before he got into politics was he was just an immigrant living the American dream. Loved his 80s and 90s movies

I loved Conan movies, but not his acting. He had the body for it though...

Even then he didn't actually work hard to cultivate his body. Now, you might be saying, but it requires a lot of hard work to get in that good of shape, and for a normal person, you'd be right. Arnold however has gone on the record saying that it felt like he was constantly cumming while working out. That's not what most people feel. Most people feel pain, discomfort, and have to struggle while keeping disciplined. Arnold though? Some wires got crossed in his brain and for him, working out felt as good as fucking. It's easy to do something that feels great and pleasurable and if we all felt the same way working out as Arnold does, we'd all have been as ripped as he was.

I saw a documentary that followed 3 different sex stories 1. I forgot, 2. was a chick with 2 bi husbands, YUK! 3. was a lady who claimed to have an incredible orgasm with her first, and was currently going to deliver her second. She was giddy expecting the orgasm and so disappointed when it didn't happen.

Bodybuilding to look cut is great! But some take it to extremes and its gross.

I believe that the steroids may have played a large part.

or you were told he did

Well, he did boink his housekeeper while he was still married, got her knocked up, and then did the moral equivalent of hiding the illegitimate kid under the floor boards until it was no longer socially acceptable to do so. So yeah, I think it’s safe to say he was always scum. But he did play some cool guys back in the 80s, but we have to remember that was all just fiction and that he is just an actor.

Hes a druggy liberal. His drugs just shrank his balls.

Hollywood got the best of him. It rotted him inside out

He used to be based, but being married to a Kennedy and being rich and famous eventually rotted his brain.

Democrats do that to you.

At least a billion of $ of taxpayer money was paid out to msm celebrities and "influencers" to push the genocide injections. It is time to audit this program and make public who took this money to be Judas goats. I guarantee that some of these scumbags shown here took this money and didn't get the shot.

Shapiro is a jew, of course he pushed it.

Every single one that pushed it. I don't care who.

The vaccine still has ads playing and billboards. It’s a fucking joke at this point.

And Youtube still displays "Get the Facts about the Vax" links under videos that tell the truth about the side effects, etc.

And the same AI crapping on Instagram, whenever something comes up about cOvId and immediately labelling as dIsInFoRmAtIoN or gives fake links to so called fact-checkers.

I was on the freeway and saw a billboard urging to get the jab so as to not make "the wedding awkward". I screamed some four letter words at that one.

I am sure Jim Jordan is already on it.

You know if there was a buck to be made Gene Simmons, aka Chaim Witz, was at the head of the line.

Obvious one. Wonder if his vaxxed fans get a discount on his KISS casket? https://www.nashvillecasketsales.com/kisskasket.htm

It's not just them, it's most Democrats - https://youtu.be/myw_PX1X3o4

I know! My family is all Democrats! No interaction with them these days, I'm good with that.

Interesting video. Thank you for that.

The fact that these goons haven’t been beaten in the streets just shows you that there is NO “far right extremism.”

Maybe we should sue them for vaccine injuries. Didn't they set a president with Alex Jones ? They should lose everything for pushing this death shot.

All these losers were told from Free Masons that they belong to a higher class of humans descended from gods. They look down on us as insects and as waste of space. They're WEF members of the new Nazi Party.

I for one am looking forward to Judgement Day so I can sit in my lawn chair while the thespians get fucked.

We won't forget this

I remember when Lemon said Aaron Rodgers should be expelled from the league and blackballed in society for risking peoples lives. I don't forget bitch

An entire team of people put that package together. If an talking head was put in front of a camera to say that, then the entire show from top to bottom was involved. It's a real shame everyone behind the camera is more or less going to get away with this.

Hey Howard, weren't you the one who filmed yourself in blackface for a new years thing with another dude dressed up like whoopi Goldberg that you mock-humped?

That works too and is a perfectly wonderful option, but I'd rather see their faces pounded until they're no longer recognizable first.

Woodchippers for those kidfucker Lizard slaves

If they ever wanted to know what side they would have taken in 1934 Germany, now they know.

I pray that each and every one of them die from the Calamari Clots ™️. And their families, too.

Oh I have a feeling karma will work this one out for us.

Doctor: Sorry Jimmy, your heart is in pretty bad shape from all those boosters.

Jimmy: Well how bad doc, how long do I have?

Kimmel was right about "vaccinated person having a heart attack" though..

there will probably come a time when theyll need our pureblood. when that time comes, ill tell them, "go eat a dick, you commie cocksuckers".

Haha funny how that pedo says "vaccinated with a heart attack"

Protip: Call anyone who insults freedom a Confederate. Those that hate your freedom have been conditioned to take a very binary stance on the civil war. Confederates BAD! So they will hate it when you call them a Confederate. Bonus points for also then being able to call them racists and pro-slavery.

Will it actually change their minds? Probably not, but it'll likely tick them off and that alone makes it worth it.

no amnesty. no mercy.

We are going to need a lot of rope!

Put a NSFW tag on this. I didn't want to start my Thanksgiving seeing 6 ugly pussies

This just shows that FREEDOM WON!

Who cares, they’re entertainers. Their job is to sing songs, and dance, and tell jokes for your amusement. Our terminally sick society elevates the singers and the dancers and the joke tellers, but fortunately our sick society is on the brink of collapse, and with it goes the high statuses of those who shouldn’t have been given such a high status to begin with. Hopefully, they will all be executed once the winds change.

Neo-feudalism usurps the warrior/ruler class in lieu of merchant puppets. They will never win because fake money only buys so much action and loyalty. If they had a religious figure thst could galvanize, I'd feel threatened but as is, it ends when were ready to die to stop it.

Remember when Howard Stern was a based libertarian? I guess one day he woke up and remembered he was a Jew.

Fun fact, Golds Gym briefly considered erasing all Arnold Swartzenegar related media from their websites and promotional materials for his comments. The reason they didn't was because their franchise holders voted not to do so.

Remember this before going to a gold's gym.

At some point the streets (for them) will not be safe.