TheDonald
Communities Topics Log In Sign Up
Sign In
Hot
All Posts
Settings
Win uses cookies, which are essential for the site to function. We don't want your data, nor do we share it with anyone. I accept.
DEFAULT COMMUNITIES • All General AskWin Funny Technology Animals Sports Gaming DIY Health Positive Privacy
1010 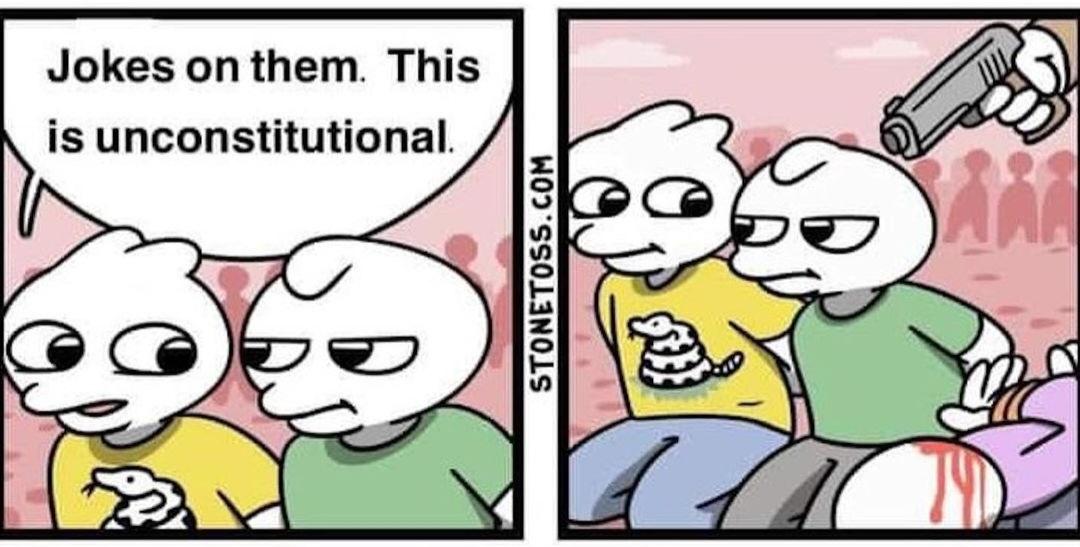 Literally half the people here unfortunately...

Bingo. Mods need to sticky this one and let it sink deeply into everyone's mind

And do it on Sunday Gun Day when every boomer is flashing their tacticool gear that's going to be redistributed to commies after they are outnumbered and killed.

"At least we still have our Constitution..."

Wow you got down voted for this and its literally true...

Could you IMAGINE if REPUBLICANS did this??

Lmao. He should have made a third cel showing the next guy dead, the step on snek guy saying that to the next guy in line

Personally in mine craft. I'm going with oil in pots with a burning wig. 🔥

I want to hear

The constitution only has authority if we believe it does.

The entire federal government does not believe it has authority, they believe that they have/are the authority.

So many people don't understand how power and authority works. Without people believing in it's authority, the Constitution is just paper and ink.

The constitution is basically FIAT then... the only thing backing it up is the bill of rights and that has been systematically devalued for the last 200+ years....

The constitution only has authority if we believe it does.

I believe Owen Benjamin said the Constitution is only as strong as its people.

Despite my obvious leaning towards libertarian policies I cannot stand libertarians because they simply don't live in reality.

"So you want to give your enemy absolute freedom to sabotage and subvert you?"

"So how do you stay in power then to enforce all the liberties you want to have?"

"Well people will just choose the right thing for themselves"

"And what if that right thing is to indoctrinate people and infringe on your freedoms?"

Same with moralfag conservatism. See the conservatives freaking out about Nick Fuentes, who I literally know only because other people tell me about him, because he's an "anti-semite" whilst literally every conservative is called a racist mini-hitler by the left.

The fuckers just changed the "laws" in Canada to get around the constitution.

They didn't have to change the constitution. We have always been subjects of the queen/king and the government she/he allows to rule for her/him.

Eh the existence of a monarch doesn't invalidate the constitution. That's why it's considered a constitutional monarchy. If they didn't change it, maybe your constitution doesn't guarantee the right to bear arms. I have no idea.

The monarch is the ultimate ruling body. Look up order in council. Does not need any prliamentary debate or approval. You are simply told there is a parliament and a constitution even a charter of rights. They are meaningless and can be by-passed as needed.

As the saying goes, “it’s going to get worse before it gets better.” It’s going to be a few generations until the people rise. It won’t be us, our lives are too good to put it all on the line.

I used to think like that when I was young and dumb, now I cringe when I hear people say it. The constitution is just a piece of paper to some people, if they have a gun and you don't, the only rights you have are the ones they decide you have at that point in time.

This is also why a lawyer will tell you to ask for a warrant, and if they don't have one, even if you don't give them permission to enter, you will 100% lose if you try to stop them, either with your life, or financially in court. The only time you should stand your ground in that situation is if you have nothing to lose, and you accept death as the final outcome.

Don't worry, they'll be demanded to stop with a stern letter after going through the court system all the way to the supreme court. Might take a year or two, but you hang on there, buck-o.

Do you want to give up? or perhaps people think succumbing to nihilistic despair or engaging in futile displays of rage will change the situation we find ourselves in?

You are not yet dead, nor imprisoned nor deprived of the ability to communicate, gather information and determine a course of action that might change the circumstances we find ourselves in...

Fraud and rigged elections do present a barrier that appears insurmountable but if your plan revolves bitching like a bitch instead of working towards solutions that can be implemented then your worse then useless because you are actively participating in the demoralization campaign...

If you want to be a Bitch to the establishment then get on your knees and start sucking knowing that you are suck just to demoralize others... If you are a Bitch to nihilism what you are doing is worse then surrendering because you are actively hurting the efforts of those who fight on, those who struggle against what appears an impossible fight...

If you have to ask about "we", you haven't been paying attention. Take a lesson from Afghanistan. It's called "Guerilla Warfare". They all live somewhere, have relatives and family. Don't think they are protected 24/7.

America is not lost so long as we still live.

They will not take me alive. Liberty or death 2024

"imagine if it was the other side!"