TheDonald
Communities Topics Log In Sign Up
Sign In
Hot
All Posts
Settings
Win uses cookies, which are essential for the site to function. We don't want your data, nor do we share it with anyone. I accept.
DEFAULT COMMUNITIES • All General AskWin Funny Technology Animals Sports Gaming DIY Health Positive Privacy
1765 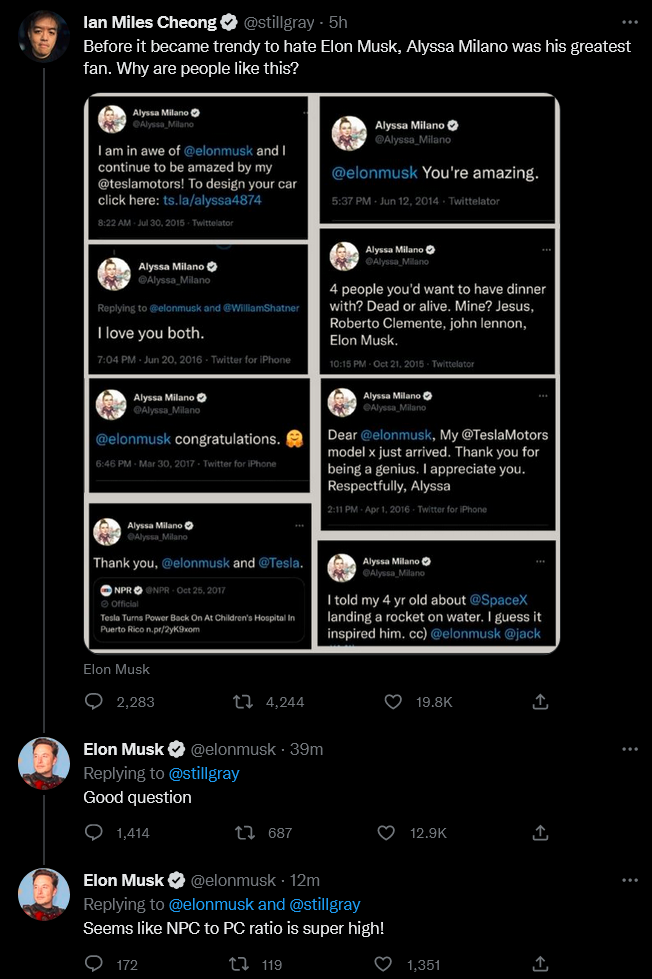 then he was worse than hitler

remember they don't really hate Elon musk.. they hate that he is preventing them from rigging elections by using the world's most powerful social media companies to silence political dissidents and critics of the Democrat Party

they want the social media and internet to be under the control of the Democrat Party silencing and censoring anything negative about that party..

they want a totalitarian government that silences all of its criticss

to be fair she isn't a fascist, she's a retard pawn of the actual leader fascists

these idiots will always exist. people who have no identity other than "i can be bought"

"Retard pawn" is pretty accurate, for sure. Her whole life is "what can I do or say to make these specific people like me, and give me work?"

Comments on PDW seem to view Musk the same way so 🤷

Yeah, I was watching Just Shoot Me a while back, and Jack Gallow, the magazine owner in that show would sometimes reference how stoked he was to meet with Donald Trump.

Before politics, and in the 90s and 2000s especially, Trump was seen as a high-class figure. Almost universally loved. Then came the golden escalator and brains all over the US short circuited.

Just typical democrat projection. They literally are running on Hitler's platform but only slightly less anti Jew and 100% more hate on whites.

she is mentally ill.

Good point. Lots of documentation about that here:
https://patriots.win/p/15HIhWzTCT/

that happens when you murder your unborn children too many times

They rebooted her software and switched the like hate Elon bit.

rebooted her, as direct deposits in her bank account. That's her job, along with that gay guy and DisappearingDad, they are paid to shill out their garbage. No one is that one sided

imo they get hot patches and we get to see the bugs before they are squashed. Every time a leftoid signal zombie is suddenly caught feeling like an idiot and looking to their programming for the answer they cannot yet defend, that was a bug resulting from the latest hot patch.

both sharpton and jackson lauded to the skies how Trump was among those very few who walked the walk and opened up jobs to POCs, not just talked the talk show circuit talk talk virtue signalling so normative among celebs and big names, ( a la lebron and his 'school system' tax dodge).

iow, not only was Trump repeatedly awarded by both those race hustler supremoes, he were lauded for actually doung something for POCs.

then he campaigned on DrainTheSwamp, and began doing it to msm even in '16 campaign pressers and rallys, and was instantly the scapegoat, for all ills present and past, forever and ever...

Al Sharpton and Jesse Jackson ARE the Swamp. End of story.

Trump cannot do this struggle alone.

Trump supporters must take charge and carry out their duty.

Which, naturally, includes the public trial and execution of Sharpton and Jesse Jackson by flame-throwers and anti-aircraft gunfire.

Not the swamp. They just perfected racial victimhood grifting via religious channels.

He did the same with Mar a lago.

That entire area with as white as you can get, didn't want black folks around or working in the town, etc.

The NPC meme might be the greatest meme of all time the way it has truly captured an entire political movement so succinctly. They really are like programmable computer characters following the current thing they've been told to believe in. How else do you get someone who despises big pharma and then put all their trust into big pharma so religiously?

I wonder if she's told her four year old about his murdered siblings yet, and if it also inspired him.

"Did you enjoy the meat pie?"

Those are major mood swings

It’s the Change of Life.

Women should not be in charge, period.

Look what happened to Kattegat when King Ragnar left Queen Aslaug in charge during his sail, a dissaster.

But Adam, the snake said it's fine for us to eat this apple.

SHE HAS BEEN APPOINTED INTO THE FJB SELECTION??

But we do know what Monica Lewinsky is famous for!

She was in ‘Who’s the Boss’ with Tony Danza bro

Every Gen X male masturbated to her at least once. It was like an initiation into puberty.

you weren’t there man

She is just following the orders of her Globalist owners.

Probably fucked kids and now has to do whatever they tell her.

They loved Trump until they didn't.

Realize that celebrities sell their personas to Hollywood. She got her marching orders and started attacking him like the good attack dog sellout she is

Wouldn't be surprised they contractually have to share their account credentials with a centralized tweetfarm. If so, that would be a TOS offense.

Haha, shut that bot down. 😂

Why does anyone care what a D-list celebrity from 1986 has to say? Stop paying attention to these people.

Child actors/entertainers are the most mental unhinged people in our society.

She was Sexually molested and abused. She does what she is told to do and she thinks the way they tell her to. Her vagina and her mind are owned by the Jews.

"4 people you want to have dinner with..." - I can only imagine how insufferable she would be at dinner.

There is 0% chance she has any clue who Roberto Clemente was, someone clearly wrote that post for her

Just like Trump, they loved him until he ran as a Republican.

They hate nothing so much as an elite who turns against elite interests.

It was the same with democrats and Trump before he ran for president.

She lied about "giving" her Tesla back. No way that happened.

This dumb bitch got a free Tesla in exchange for her posting favorable content about Tesla to her socials. Her Tesla contract either expired, or she simply felt it more important to virtue signal than continue to accept gifts for her influence.

This is how it works for wealthy and celebrities, they pay for FUCKING nothing. I have a "friend" who is an up and coming country/pop artist. He was BROKE for years, and now raking. He told me last week, now that I can afford stuff, no one will let me pay for it. They just give it to me.

NPC was/is a great meme for the war. It was banned from all social medias because it's effective at destroying the ai bots that run rampant online to try and steer narrative

What a waste of a great pair of tits.

So, does this mean we can bring back the NPC memes on Twitter?

Also, Trump was adored by so much of the establishment up until he seriously ran, then they broke.

Anyone who threatens their little leftist hell hole bubble gets branded as a hitler nazi.

Somebody she wants to have to dinner:

I don't think that would go the way she expects.

so she instantly turned on someone she considered a 'brilliant genius' without a single pause. incredible.

In today's episode of the tweets of our lives...

Aaaaand: still don't give a shit about Alyssa Milano, even if she was a Pepefarms Mint Milano cookie...