TheDonald
Communities Topics Log In Sign Up
Sign In
Hot
All Posts
Settings
Win uses cookies, which are essential for the site to function. We don't want your data, nor do we share it with anyone. I accept.
DEFAULT COMMUNITIES • All General AskWin Funny Technology Animals Sports Gaming DIY Health Positive Privacy
2421 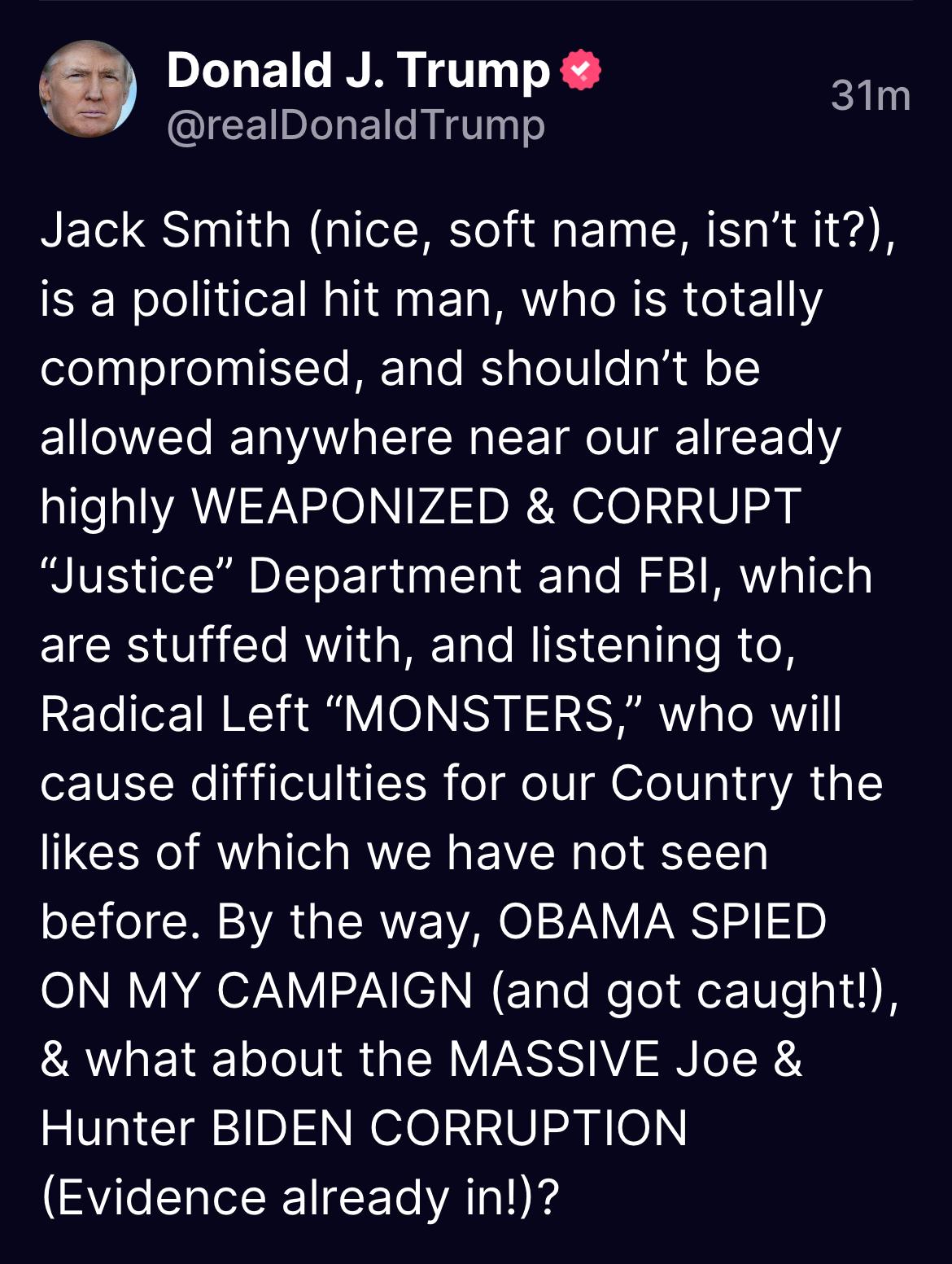 Is there anybody in the world better at revealing the truth than Donald J Trump?

The main reason why the Establishment hates him. He spreads too many "dAnGeRoUs" ideas to the plebs. Ideas like America First.

Notably he was the chief prosecutor for the Kosovo Specialist Chambers in The Hague, 'investigating' war crimes committed in the Kosovo War.

And left a trail of judicial abuses behind him there.

You do not know Jack!

I have a theory (based just on the ugly mugs and ideology they share) that he's related to Ben Smith from Buzzfeed, NYT and Semafor.

He is a jew. This name makes him sound white.

I love when he makes fun of their names!😂 I want no one but Trump! The rest are globohomo imitations pretending to TRY to be like Trump!

You want one? How about an Indian name?

In honor of the code talkers

Jack Smith... more like Agent Smith from the Matrix.

Glad to know he was involved in the Lois Lerner IRS scandal.

That little episode wasn’t just slow walking non-profit status for “Tea Party” groups or groups with “Patriot” In the name...

They also demanded email lists and donor lists from the applicant groups. Even a $10 donation got you on the special audit list. The Feds had a special computer station and office at Perkins Coie (Mark Elias firm in DC) that was able to access government databases, including IRS data.

Those donor lists were put on CDs and passed along for audit. The process was the punishment.

The government has been weaponized against the people for a long time.

Every time you hear Dem election and Marc Elias just know it's the alphabet boys rigging your election in the open, proudly.

Not that many experts in the election fortification field. Plus we only hire the best.

Allen West was in on that.

I remember him and his “bayonet” sound clip when he got on the scene...but then I recall some weirdness or rumors and then he moved to Texas or another district in Texas...and now I just don’t know.

The Deep State is almost running out of dumb and sincere loyal fuckers and has to reuse them ... a lot.

I want to live where you do.

We should start giving them nicknames for Trump like they do in the Mobs of NY. Jack The Knife Smith.

Yes that is a fags name Trump, thanks for pointing it out.

It is a faqs world

The Republican party has plenty of tools they can use to keep their presumptive nominee from being attacked this way by the opposite party. But the Republican party doesn't give a fuck about its constituents and is ready to allow crooked Democrats to disenfranchise us completely., By turning their backs and allowing Trump to be disqualified by fake charges ....And every fucking Republican should be dragged from their office and bludgeoned to death for letting it fucking happen

Yep he’s pretty much screaming into an echo chamber.

Twitters gay. Everyone already has their minds made up one way or another on what he says and it wont matter. The retards on there wont be swayed by any info. Any. This place is gay too but at least i dont have to read what some faggot thinks.

It still needs the additional visibility. If not tweeting, then not riling up enough folks who then demonstrate their lack of intelligence.

What President 45 does best is rile up.

What he will improve on is hiring.

And we will keep winning.

Exactly, Gotta go where the people are. It's the same with dating apps; there's like 200 of them, but everyone's on the 3 big ones (Tinder, Bumble, Match).

you have a left bent to you, going negative paints you as a self-hating lesbian, it's pretty obvious, just saying.

I dont hate myself i hate stupid people.

Ok, I see where i errred. Not self hating, but more loathing you'll never be an Apex white male. Sure you can get the haircut and the tool belt, but your still gunna have a virginia.

I am alpha af and some fag over the internet going to tell me im not haha. To each their own i guess

I’m not suggesting you get on Twitter. I’m not on Twitter or any other social media other than this place. I’m saying he needs to go make some liberals cry instead of making his base shake their head yes and agree in unison.

Probably not going to happen but he might be standing by for the nuclear option: A Call to ACTION. He'd have one shot at getting a precise direct message out to everyone before a potential total media blackout.

It's a whole other discussion as to what would happen after that!

Obama did spy, and the NYT’s admitted it.

He should be tweeting this if he wants everyone to read it. Truth Social has turned into a detriment to getting the message out.

He's contractually obligated by Truth to wait 6 hours before posting to another social media platform.

We The People need to announce that President Trump WILL be our nominee for the 2025-2029 term of US President, and there will be no cheating tolerated. And if President Trump is so inclined we will allow him to serve for the 2039-2034 term. And that Jack Smith and everyone "running" him should start packing their bags and go home to China.

Every person who does not stand against the bastardizing of our inherited Republic RIGHT NOW is guilty of treason and may be exiled or hung.

This rotten to-the-core government of ours IS our responsibility. They have harmed people all over the world and now we and our fellow citizens are being harmed.

We The People, and the land of our Fathers are the commodity they sell to China and Claus Schwab.

Neil Oliver asks “I Wonder What Would Happen If”…

When Neil Oliver tells about Mary Barbour I wept, the XI/Schwab/Rothschilds of that era were going to put women and children out of their homes while their husbands were away dying like flies in the hopeless battles of the first world war.

I know nothing about World War 1, but if I had to guess I would say - Maybe Germany wanted to rid themselves of the Rothschild bankers, or print their own currency like Napolian, or Sadam Hussain, or Kadafi.

And what if we stuck together, what could man-boobed Milley and his mini-me army of effeminate, transvestites do against us? Would China have to break cover and put forces on the ground - woe be to them who dare. Or would Milley and our false leaders let China bomb towns and neighborhoods inside the US ?

Once upon a time we slayed monsters.

Don't count on it.

The poor guy is still whining rather than ordering the militia into the streets. What a disappointment

Trump is going pretty hard against him, makes me wonder if he's worried.

Well you shouldn't have sic'd the FBI on the people who protested for you in the first place after January 6th. Trump was president then and 100% in command of that. There are innocent people rotting away in jail right now.

Please. If there's one thing we all know by now, Trump was never "in command" of the FBI or CIA, and barely the military. These are rogue agencies, and if he had tried to do what you suggest (blocking their precious investigation) he would be in a cell awaiting trial for insurrection right now.

When is Obama gonna pay for HIS crimes?

Never. They are untouchable.

What does he expect? Nobody went to jail when he was president, and surely nobody will go to jail with Biden installed.

I just love every stinking word that comes out of this guys mouth!

We have the evidence.

Biggest political scandal in US history and not one conviction.

You must like it you keep taking it? Thanks

As a trump supporter I feel this kind of rant is what turns people off that are on the fence….at least that’s what I’m told. Anyone else ?

How are we going to fix 2020 and 2022 ? People think I'm crazy when I say Trump and friends were cheated. These are people on our side who voted for him in 20 but want someone else in 24?

Probably one of his best "tweets" ever.

what about the Massive Joe & Hunter BIDEN CORRUPTION?

Nothing will be done about Joe & Hunter.

They got away with it.

Reason for the "Soft Name" comment I think, maybe, I don't know... https://www.amazon.com/JACK-SMITH-Jackets-Pockets-Weather/dp/B0B71RRX88

Jack Smith sounds like a cover up name. Obviously a made up name to hide his history of manipulation.

Someone needs to explain to me why there’s an entire movement of people who will protect Obama at any cost.