TheDonald
Communities Topics Log In Sign Up
Sign In
Hot
All Posts
Settings
Win uses cookies, which are essential for the site to function. We don't want your data, nor do we share it with anyone. I accept.
DEFAULT COMMUNITIES • All General AskWin Funny Technology Animals Sports Gaming DIY Health Positive Privacy
2431 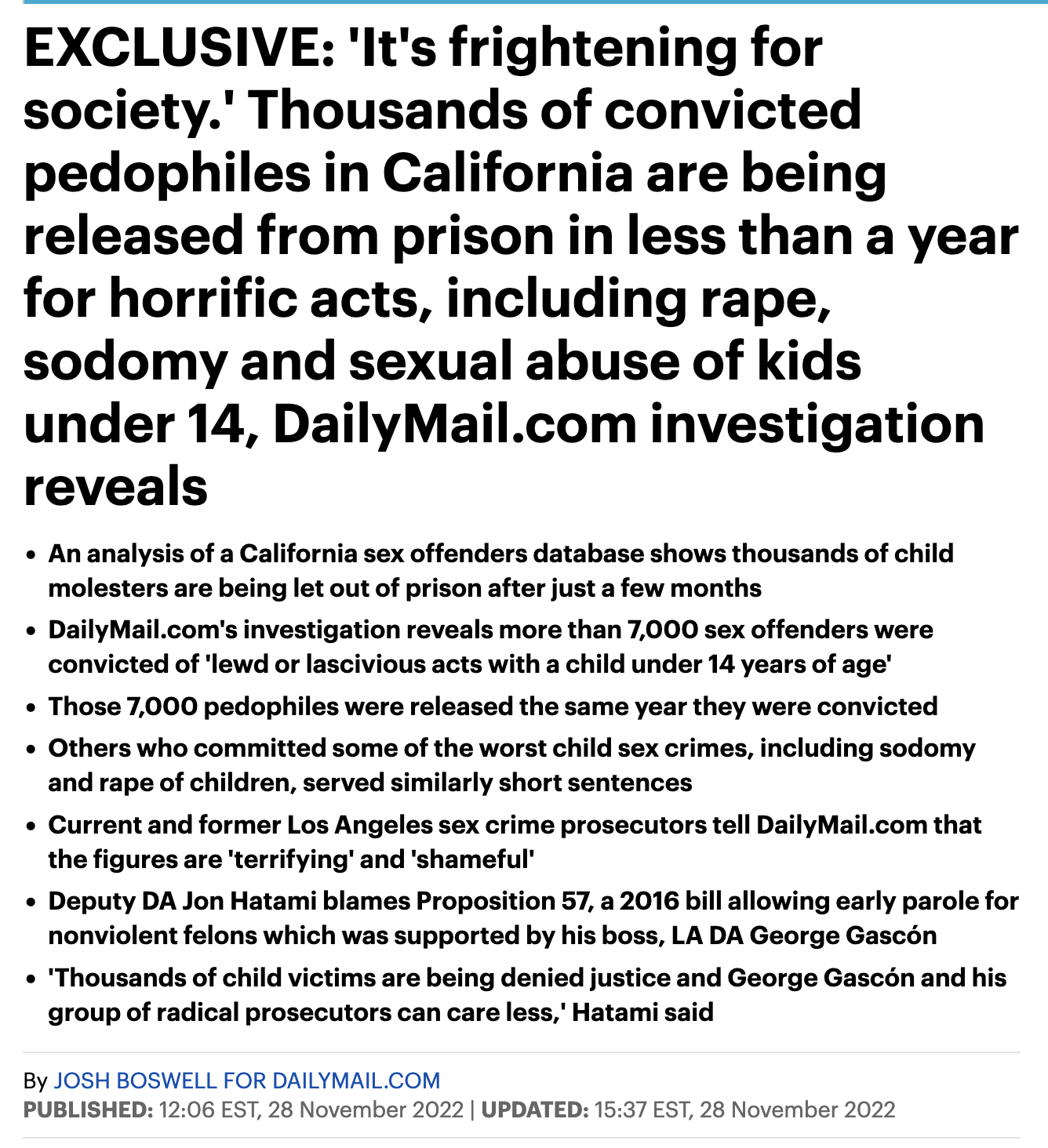 Evil has decided now is the time to do a reset to advance the demons.

*LOOKING AT YOU GASCON.

Prison inmates be losing there morals that’s all I’m saying. There was a time none of the diddling fools would live long enough to be set free. Ain’t that something? When you can’t even rely on prison morality. Y’all better find Jesus quick. We are in the times he warned of. You don’t want to be here when he comes back. Cause it’s gonna be lit, as in lit on fire!!!

The demons wised up to that and made sure the pedo's were both isolated and then promptly freed so that the inmates never had a chance to kill them. Thats up to the public now.

Gary Plauché? Cept in this era of clown world, had he done that today they'd probably give him a life sentence...

The California prison system now protects chomos. They go into a special area in the prison reserved for kid fuckers and prison gang members that "snitch" on their people.

Something to make known as widely as possible...

That's messed up shit, yo.

What a crazy read :O

It's always time to do the Lord's work.

How is rape of a child "non-violent"?

CNN adds a chyron underneath the story saying "Rapey, but mostly peaceful child molestation" and viola.

Just like how we went from 'child rapist' to 'child molester' to 'pedophile.'

Can the next one be "bullet sponges"

In Canada now they are also saying "mature minors"

I believe they prefer to call themselves "child enthusiasts".

They need a new term.

How about people with non aged discrimination sexuality? NADS

Then we could just cut off the NADs...

I know it wasn't rape rape.

Sorry about the video quality, hard to even find it.

Misgendering though. And silence. Those are violence.

Right? What the fuck.

So now the message to parents is make sure he can't offend again before you call the cops.

No you uncultured swine, the message here is to wait at a payphone in the airport for the perp to be walked by escorted by law enforcement.

The ol' Gary Plauche treatment. This is the way. The only way.

The name escaped me at the moment i wrote the comment. Thank you.

No problem. My older brother and I were just talking about him at Thanksgiving. Haha. That's the only reason why I didn't have to look it up.

I think we need to add 'Plauched' to the Urban Dictionary this year. Also, we should all buy shares in Wood Chipper manufacturing companies.

All Justice is retributive justice. Denying retribution by stepping in between a criminal and their rightful punishment, in order to deliver hand slaps and coddle them, is no justice at all. It's a crime against the victim. The reason you let authority handle criminal justice is to avoid inaccurate mob justice and vengeance cycles, but if authority deems no crime worthy of retribution, well, nature abhors a vacuum.

Well said. To the top!

So y'all need to hide yo kids, hide yo wife, and hide yo husband cause they rapin' err'body out here.

Rape is not a crime in CA. Hasn't been since Prop47 reduced it to a misdemeanor. Kamala Harris titled the bill the Safer Schools Act 🙄 It's a misdemeanor with a max penalty of $2k for raping an infant. Been that way. Been screaming about it all over socialist media. Nobody listens.

There is an international cabal that is intent on destroying the U.S. This is just one of their many methods of doing it.

We are under attack. Invaded, corroded, corrupted, emasculated and disenfranchised. And they've only just got going.

I have been coming to the conclusion that we’re already in a de facto tyrannical dictatorship. The elections are stolen. The taxes are confiscatory. The “law” only applies to enemies of the state. Every government department is corrupted top to bottom, and with them every sector of the economy and business of any significance. There is no difference between the media and the government and no constitutional right is given any consideration. I’ve watched every single amendment in the Bill of Rights (minus billeting, so far) blatantly violated at every level of the judiciary and upheld on appeal to the Supreme Court.

I’m not very happy about this.

'I’m not very happy about this.'

A sublime understatement. Dry humor at its finest.

Great comment. Let's face it, we're only getting out of this the hard way.

And people here say start local. Sure let us spend 5-10 years starting local as the top advances their agenda making everything local not matter in 5-10 years.

They have been working on this for at least 150 years, so we are near the end goal. The one world government is near. A total police state is at our door step. If we wait much longer it may be too late.

It sure does. And they are the 'Butchers', as opposed to the Carpenters.

Off topic, but a beautiful sounding song. What a heart-warming voice.

Nothing surprises me anymore with this Satanic demons.

There's a way to fix this. But it means starting a conflict that'll put all law enforcement on the thinnest line they've ever been on.

Now imagine a victim reading this seeing their attacker released

His Los Angeles court records say he was charged in October 2014 and pled no contest to the crime in January 2015 – but was sentenced to just two days in an LA county jail and five years of probation.

He now lives one block from Royal Montessori School daycare and three blocks from Reseda Elementary School, according to the Megan's Law database

EXCLUSIVE: 'It's frightening for society.' Thousands of convicted pedophiles in California are being released from prison in less than a year for horrific acts, including rape, sodomy and sexual abuse of kids under 14, DailyMail.com investigation reveals

• DailyMail.com's investigation reveals more than 7,000 sex offenders were convicted of 'lewd or lascivious acts with a child under 14 years of age'

• Those 7,000 pedophiles were released the same year they were convicted

• Others who committed some of the worst child sex crimes, including sodomy and rape of children, served similarly short sentences

• 'Thousands of child victims are being denied justice and George Gascón and his group of radical prosecutors can care less,' Hatami said

All Justice is retributive justice. Denying retribution by stepping in between a criminal and their rightful punishment, in order to deliver hand slaps and coddle them, is no justice at all. It's a crime against the victim. The reason you let authority handle criminal justice is to avoid inaccurate mob justice and vengeance cycles, but if authority deems no crime worthy of retribution, well, nature abhors a vacuum

This is the next woke frontier.

Parents will be told diddling their kids is "healthy." Muzzies call it "play". It's why their kids are willing to strap bombs to themselves. It breaks them from infancy. No moral code exists. They'll do exactly as told & never question.

They’ve already have the pedophile marketing campaign. Love is love, all age relationship and all these other sick marketing terms.

The gangs hate pedos. If this shit keeps up, and the only way to deal with them is street Justice, the bloods and crips may actually work together

I didn't think California could become an even bigger shithole, but this is clown world after all.

If you watch the news it's disgusting how they send them to remote rural counties every single time. They don't even care if they're placed near schools or public venues, it's purposely done.

The language of that law was very intentionally confusing. It changed things like robbery to non-violent and subject to early release.

Why do decent people live in California?

Before the 90s it was a great place to live.

Yea, I image it's like everything, degrading. Some places just faster than others.

You could look at it like thousands of pedophiles are avoiding justice, or that the hunting season on pedophiles has been extended, and there's no bag limit.

Bring pikes and popcorn. Fun for the whole family.

The chomos running the start don’t think rape is a violent crime? Probably cuz they all diddle kids too.

Time to load up on ammo just in case.

Should be freed alright

Freed from this planet

It was a long day, lmao

Some in my area aren't even going to prison. It's more than California. Seems like it's a judge thing. Giving them weak sentences like "you were in jail a year awaiting trial, you're free to go with 2 years probation," or "you'll have jail every weekend, because you work weekdays."

And Cain Velasquez was just released on a million dollar bail three weeks ago? Coincidence? I hope not... https://youtu.be/qOqTC3QIuCQ

Kamala Harris - Prop47 reduced over 50 felonies to misdemeanors including rape. She titled it the Safer Schools Act. CA hates her guts but everyone wants to believe fake news.

No one screams as he falls to his death like Gascon!

May he be assraped in hell.

Inb4 radical fathers get their own justice

In a just society, the last thing they would hear is click clack.

Dear convicts, why are these pedos living through their prison sentences. You gots gotta boost those numbers

yes, you must kill them all when the time comes. it's literally inevitable how evil is going to go all in at this point, they are releasing all kinds of criminals and trying to make it criminal to defend ourselves. FUCK THAT!