TheDonald
Communities Topics Log In Sign Up
Sign In
Hot
All Posts
Settings
Win uses cookies, which are essential for the site to function. We don't want your data, nor do we share it with anyone. I accept.
DEFAULT COMMUNITIES • All General AskWin Funny Technology Animals Sports Gaming DIY Health Positive Privacy
728 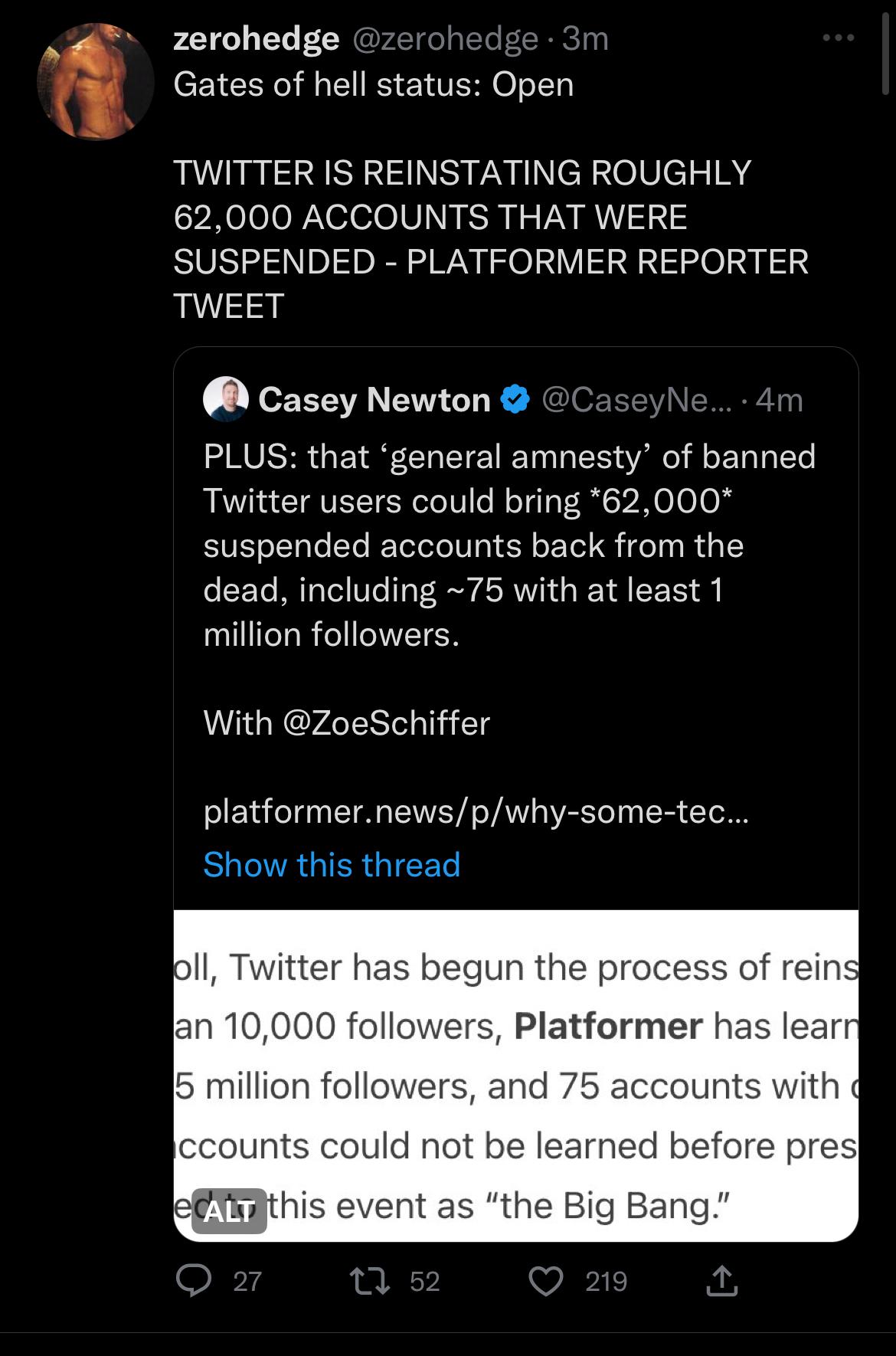 Everyone should be on there fighting again. We can’t complain about being censored if we aren’t gonna use free speech when it’s available.

He already said we won't be allowed to hurt anyone's feefees. Butt ok 👍

I’ve been hurting feelers on there for a month or so now. No issues.

Not at all what he said lol, wtf?

Anything TRUTHFUL is going to hurt someone's feefees. That's just how the truth works. So TRUTH is hate speech. Which he's saying he will throttle 🤷

He never said you cannot say it; he just is not going to feed it to the masses easily.

"It's ok to be white" is "hate speech" fren 🐸 I'm not saying don't tweet. I use Twitter, I'm glad he bought the platform. But if you're censoring "hate speech" you're censoring anything truthful. We'll see what happens but EVERYTHING TRUTHFUL is considered HATE SPEECH. If no one can see anything you post it's pretty fucking irrelevant to have an acct reinstated.

I would ask 2 questions before jumping the gun.

*So the discussion was about BLM vs Blue Lives. She thought all the right wing use Blue lives and could not consider that Blue lives is a small facet as many see the police as agents of a corrupt government. She gave me a story about someone having a panic attack because they saw a bunch of blue lives flags and were not relaxed until they saw a pride flag. I pointed out that being scared of a flag is not rational; the fact anyone gets to that state is a sign of mental health taking a nose dive and a result of pushing negative values.

Hurt fee fees until you get banned again.

If advertisers are jumping ship then he has to create revenue somehow. It's not easy getting handed something corrupted when the financial backing comes from corrupt corporations and fixing it overnight. He has to tear it down and remove the trash so it can be used for it's intended purpose. Twitter is going to look very different in a year

Once Elon unleashes the accounts from their long slumber

Still only PDW for me.

The stolen elections are still happening. The new House will do absolutely nothing - guarantee it... bookmark or screenshot this post and check back in June 2023.

The only working solution is to protect your family from as much of the Globalist corruption as possible while attempting to convince people from your local community to create a parallel economy.

PDW is unfortunately compromised. It's still fun, but it's been growing more and more stagnant over the two years since the name change, which is when the f e d s took over

The Feds didn’t take over.

We’ve been suffering through one of the biggest demoralization campaigns I’ve ever seen for the past two years, and it’s having its intended effect. Lots of people are checking out and giving everything up for lost.

Rather than engaging our opponents, we spend most of our time fighting each other these days too, so we don’t gain momentum we just spin our wheels.

This is the place to arm yourself with facts, that you then take to Twitter, and engage the enemy on the battlefield of ideas. That’s how it’s supposed to work anyway, because we won’t gain much ground without wave after wave of reinforcements. It’s a culture war out there.

Fight with facts. Post and ghost. Don't get directly personal. A commie is a commie.

That's about one for every new IRS faggot.

61...you are just a youngin. I am a bit older than you and have never had any of those things. My life certainly did not miss any of those things. In the last 20 years I also ditched cable, newspapers and professional team sports. Life is still full. Just trying to follow the two greatest commands of God makes for a full and busy life.

Only 62k? There were probably 62k NPC accounts alone that got banned.

I think it would be very interesting to see a list of those accounts, and the reason they were banned, then collated into conservative or liberal buckets. I bet the result would be very lopsided.

Reminds me of the part of "Heavy Metal" when "the mob rules" by Black Sabbath played.