TheDonald
Communities Topics Log In Sign Up
Sign In
Hot
All Posts
Settings
Win uses cookies, which are essential for the site to function. We don't want your data, nor do we share it with anyone. I accept.
DEFAULT COMMUNITIES • All General AskWin Funny Technology Animals Sports Gaming DIY Health Positive Privacy
1230 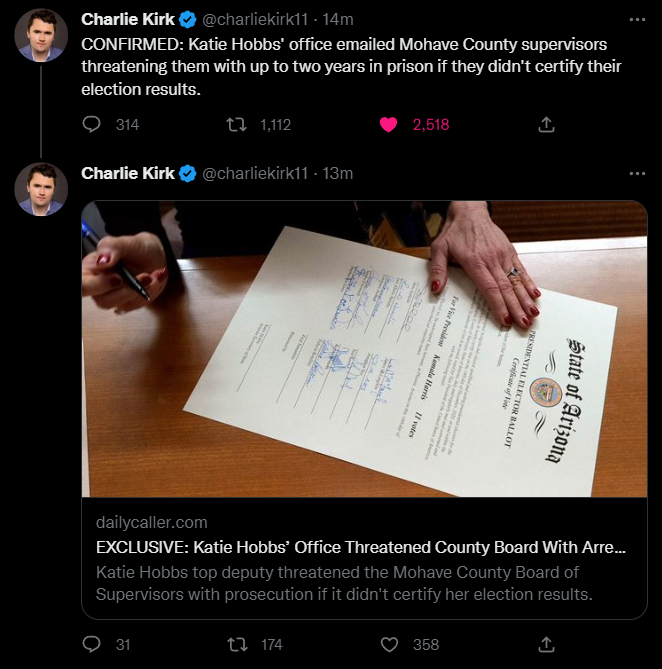 Still wondering how refusing to certify an election is a criminal act.

This. Two years for not doing something? The crime was literally "nothing?" What are you in jail for?

I mean what did you do?

Nothing, i got arrested because i did nothing instead of something.

If you have the goods you need to hold the line and force them to arrest you. Your refusal to certify a blatantly fraudulent election cannot be the basis of a criminal complaint. I wonder if these guys are just totally pussies or if the quality of evidence is insufficient for them to take the gamble.

I mean couldn't you just infinitely stall? Call in sick, go on vacation or how about.. "i am swamped, I'll get this over to you hopefully sometime in the spring, k thanks"

Probably one of those tiny little laws that get put on the books that no one really cares or thinks about but which is actually put in their as a strategic position so that corrupt people later on can use it to force other people to enable their corruption under threat of prison time.

It's amazing how they can find "laws" to justify anything. One time I was upstate NY camping and I had a shotgun in my truck. I did everything by the book. I had all the paperwork for the shotgun. I had the shotgun in the cab of the truck but the bullets in a box in the bed of the truck so they weren't in the same place. A "good ol' boy" cop came by to check everything out. Right off the bat he was annoyed that a "city boy" dared to be out in the country. After getting a lecture from him about how a bear was going to end me and I had no business being there, he searched my truck and saw the shotgun. But the more he searched, the more he saw I had all my "t"s crossed and my "i"s dotted which infuriated him to the point of rage. He actually had arrested me, put me in a squad car, and brought me to their tiny station house. He put me in a holding cell while he poured over lawbooks in the other room.

I actually heard his deputy tell him, "You can't hold this guy, he didn't do anything wrong.", to which the cop replied, "Shut the f**k up". I remember sitting there thinking how fucked I was.

Eventually he hit paydirt and found something he could charge me with. Poaching! He found a law that if someone was found in possession of a shotgun and a flashlight they could be charged with poaching. Since I had a flashlight (as I was up in the dark camping) and I had a shotgun I was now a "poacher". I was booked and released and told to come back for a court date.

I got a lawyer and showed up at their "court" (which by the way opened late because the judge also owned the hardware store to give you an idea of how small this town was). The fact I brought a lawyer enraged both the cop who arrested me and the judge even more. Especially since the cop had told me when he released me that the judge would go easy on me as long as I didn't bring a lawyer! Ultimately I was found guilty and ordered to pay a fine of a few hundred dollars. In the end, the whole thing was just a way for this small town to extort some money. But to me it just proved how corrupt and how far people can go and you have no power.

Man, this was in the 90s but I remember that the cop who arrested me was named Matthew Wood, and the judge who owned the hardware store was in Grahmsville. This bullshit happened in the catskill mountains near Ellenville.

Find laws to convict your enemies of breaking and technicalities to make the crimes of your allies legal.

One of the many benefits of funneling millions of dollars into controlling the entire legal apparatus of the state.

If it is illegal to not certify, then what is the point of having a certification board? Sort of seems like when this process was put into place, the board would have had options to certify or not, or else the people creating the system would have just skipped this redundant step.

Get threatened with jail time if you don't certify a clearly stolen election?

Hobbs should be in jail for taking away the civil rights of countless Arizonans.

She should hang between two tucks driving in opposite directions at a rapid speed.

What exactly is the point of cerification then, if it is illegal not to certify?

TAKE A STAND AGAINST TYRANNY

Why wouldn't one of them challenge it? Come and arrest me! Let's see how it pans out. Fucking Cowards

The sole responsibility of the Board of Supervisors is to make sure that the election in question IS certifiable in accordance to Arizona law and not mindlessly 'rubber stamp' certification. This election is abjectly uncertifiable. As such, the Board of Supervisors of Mohave County are doing what they are being paid to do, like the "supervisors" of Maricopa County had done what they were being paid to do by Soros, etc., etc.

Was it a “strongly worded” email???

Secretary of States has the power to arrest and jail people... clown world has no boundaries.

W,e the people, have to rally around the fighters of fraud. Somebody needs to rally the troops for a peaceful protest.

Arrest this cunt for corruption and election fraud!!! Or someone needs to whoop her ass

Today I learned that Judas Pence refused to hold up certification of the 2020 election because jail & shit...

The pussy’s will fold.

Just flee the state like the Democrats used to do

A month to count the votes... should take another month to certify.

Not a damn thing..

you're doing the same thing as him

so you suck too

I’m not posting it Twitter complaining, nor do I live right there in the AZ as Kirk does asshole.