TheDonald
Communities Topics Log In Sign Up
Sign In
Hot
All Posts
Settings
Win uses cookies, which are essential for the site to function. We don't want your data, nor do we share it with anyone. I accept.
DEFAULT COMMUNITIES • All General AskWin Funny Technology Animals Sports Gaming DIY Health Positive Privacy
158 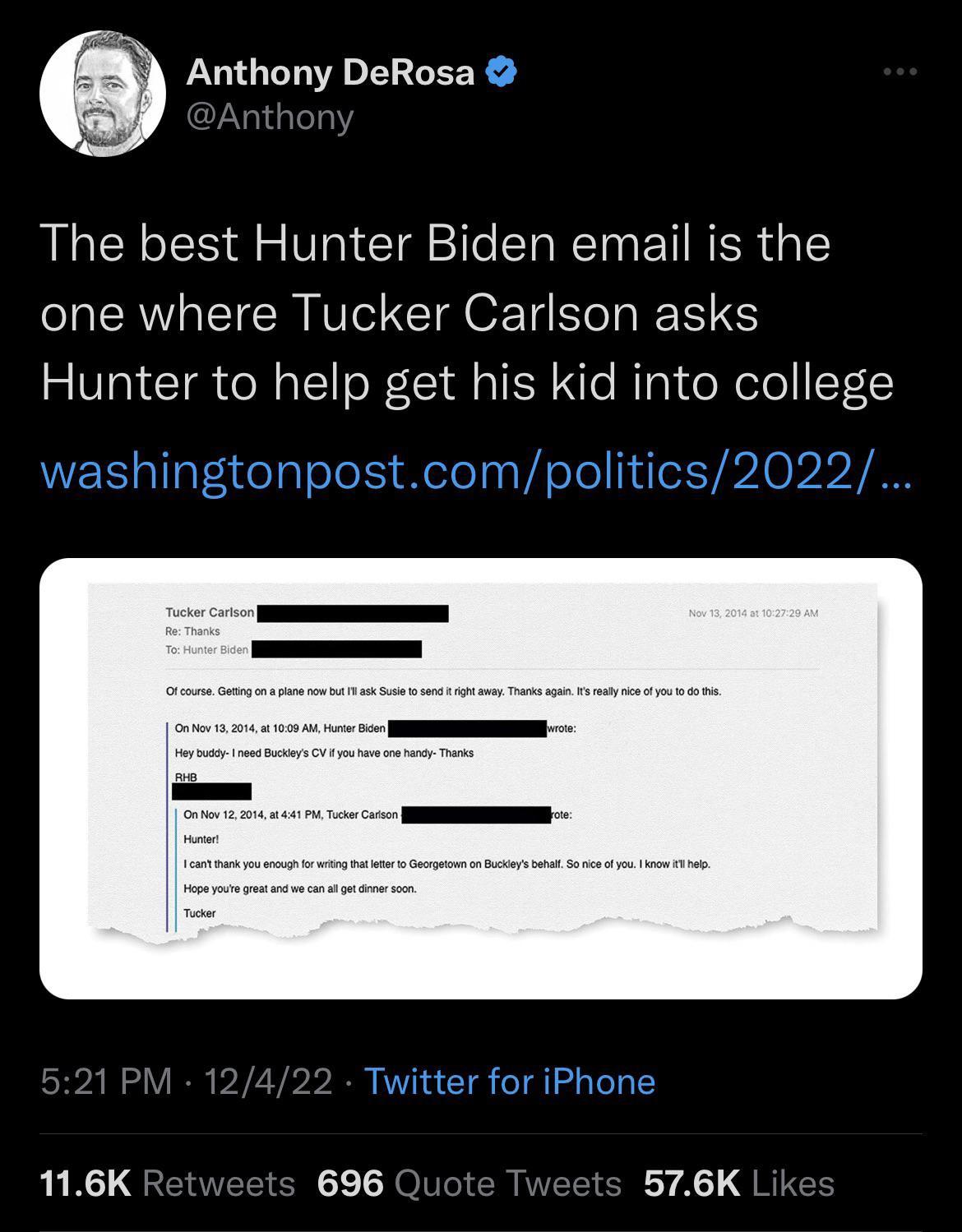 They were neighbors, if I understand correctly.

As infuriating as it is that he won’t talk about the steal, he probably did the best mainstream reporting on the laptop. Did a show or two dedicated entirely to interviewing Bobulinski. At least one was before the election.

He defended Hunter on his show in 2020, said Hunter was a good guy and we should leave him alone and they "lost the documents" that incriminated Hunter.

You people? Lol Get fucked, you self impressed little faggot.

If you don't watch then why are you defending him you fucking retard. He defended Hunter before election night.

Just pointing out that he did at least a whole show dedicated to interviewing the guy who corroborates Joe’s involvement in Hunter’s deals. Not sure why that triggered you like a little limp dick bitch.

Do I really have to be a current Fox viewer because I made a statement of fact about something that happened 2 years ago? Lol Ok, dumbass. And you wonder why everyone you know thinks you’re a douche bag. Good luck with that, faggot.

What do you mean “you people?”

This is accurate, I was appalled at Carlson defending Hunter Biden's laptop scandal. To be fair, in light of this he needed to disclose their personal connections. Had he not, Media Matters would have directed MSM to slam Carlson the next day with all manner of evidence of their friendship etc- especially had he been at all critical of Hunter Biden's "character" and the icky contents of his carelessly-lost laptops full of selfie-porn and evidence of corrupt dealings with foreign and domestic entities.

Tucker has already addressed this a few years ago …

Did he say what Trump said about being adjacent to the swamp for all those years? That you make the game work for yourself.

About the same time Hunter was using bribe money to pay for hookers and blow while giving 10% to his dad.

No.., the best one was when his Wells Fargo credit card account was negative $70K and then he emails Wells Fargo and tells them to cancel his daughter's college fund account and mail the check to him.

Fox News wouldn't have him if he wouldn't keep his mouth shut on topics they don't want discussed.

When was the last time you saw Tucker do an editorial segment on SSRI over-prescription, or the revolving door that exists between executive roles at major pharma companies, and the FDA?

Tucker needs only look at Bill O'Reilly to discover what his career looks like without Fox. He's not going to bite the hand that feeds.

As useful and well-informed as Carlson is in general, it is obvious that he shies away from certain very-important topics (like barely addressing the 2020 election fraud etc.) Even if he does have the highest-rated news show, Fox would fire him if he dared discuss "inconvenient truth" that offends their financiers.

Dude in 2014 if Hunty asked me to go party with him I would have been down. No one knew what was going on.

Weren't they roommates in college?

I've seen every episode of Tucker Carlson Tonight since the show started. Obviously he has to stay within the boundaries of what he is/isn't allowed to discuss on-air, in order to keep his job. They would have fired him quickly had he properly addressed the 2020 election fraud or similar "protected" topics, even if he does have the highest-rated nightly news show. I have no faith nor trust in Fox "news" otherwise, so I only spot-check their other shows.

One of the biggest surprises to me was his fawning apologetic dismissal of Hunter Biden's laptop and corruption issues when the story became too big for MSM to ignore. He went on about what good friends they are, and how their children are friends. He said (paraphrasing) if these allegations of mishandling selfie-porn and evidence of his influence-peddling were true (and he hopes they aren't, LOL) that there's nothing to see here, Hunter Biden is just a misunderstood family-man whose personal problems should not be fodder for gossip. It was basically tl;dr "Hunter Biden did nothing wrong."

Considering Tucker Carlson's interviews with Alex Jones on InfoWars and his appropriately-sarcastic criticism of Tolerant Left corruption/war-on-polite-society he seems like a solid MAGA kind of guy. But his non-critical defense of Hunter Biden's "character" and laptop full of evidence of wrongdoing was very strange. He was either threatened into defending him, or paid-off to do so. Or the unthinkable, maybe he is just another Democrat-coddling RINO and that's why he beats around the bush of more-important topics that he should be directly addressing.

> But this buddy-buddy BS pulling strings for favors? If this is on the level it explains A Lot about why Carlson has not gone after the Hunter Biden issues as pointedly as he should have.