TheDonald
Communities Topics Log In Sign Up
Sign In
Hot
All Posts
Settings
Win uses cookies, which are essential for the site to function. We don't want your data, nor do we share it with anyone. I accept.
DEFAULT COMMUNITIES • All General AskWin Funny Technology Animals Sports Gaming DIY Health Positive Privacy
2589 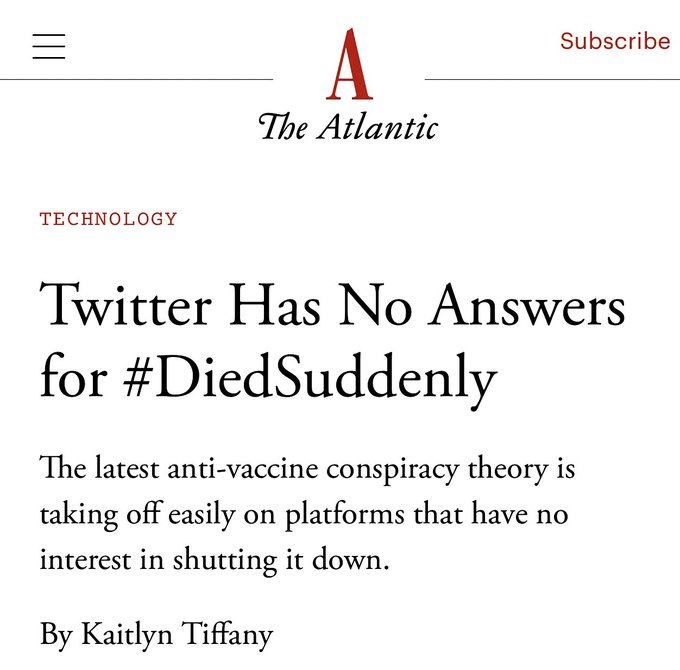 Pretty sure no one gives a fuck what someone with a stripper name says.

Musk came out and said he almost died from the 2nd vax shot and his cousin is in critical condition post myocarditis.

I don't see Twitter stopping this hashtag nor should it. There needs to be a reckoning for the murdered and maimed millions.

I mean, god forbid the population communicate freely about the jab, one way or another.

Free speech has always been a thing that overwhelmingly both sides of the aisle support... until all of the sudden it wasn't.

The societal shift we have taken on that topic, the topic of men dressing like women, pedophilia and so many other things is staggering. This isn't generational changes in viewpoints, this is gigantic leaps to what once were very fringe and extreme viewpoints in very short timelines. Example, Obama was against gay marriage in 2008.

I can only attribute it to evil. The most mind blowing part to me though is how few people see it.

You're definitely not wrong. It actually seems like a lot of initial political viewpoints are just theatrics to get them in the door.

I didn't pay any attention to Obama's campaign because I was still unawake then, but I find it hard to believe he was ever actually against gay marriage.

Lets be honest about Obama. He wasn't against gay marriage. He was against looking like he supported it for obvious political reasons. That faggot already had a gay marriage.

I agree that he was just saying whatever words would get him elected, not his personal beliefs. My point was that even in 2008, coming out in favor of gay marriage would have been a risky political move. That was only 15 years ago, and look at us now...

Free speech has always been a thing that overwhelmingly both sides of the aisle support... until all of the sudden it wasn't.

That's just not true. There have always been groups looking to silence other groups. It's just become more partisan recently.

Also, as much as the left has restricted the right on social media or college campuses, the right has used state governments to restrict the left in education and protest.

Don't be naive about basic human nature and tribalism. That's how you lose your way.

The only answer they have for us is to shut us down.

And when they do shut us down, we will just switch hashtags. #jabbed2death has a nice ring.

Facebook shut down the vaccine injuries group. 300,000 people were talking.

It is an outright genocide. The deaths are undeniable. I have thousands saved on my computer. I post what I can but it's more than I can keep up with.

People who gaslight this and people who inject this, should live in fear, way worse than that Andy Ngo guy lives in.

Exactly. Like Dan Bongino said on Monday and previous broadcasts, I live with a certain fear each day that DS could strike our family. Fauci for Nuremberg.

For a genius innovator like Musk to not see the mRNA scam coming from a mile away is really odd to me.

Sometime you just have one moment….one truth shown that wakes you up and makes you say “i was so wrong…if they lied about this what else” then its a few more, you see the connected uniparty all fighting for the same goal just taking different roles. Musk while waking up was on their side not long ago until the left mobs went after him so hard he started talking with those the media hate. They pushed him out. He still got a long way to go and years of not cucking

This can go too far like how every vaccine is bad and q-anon (i like to think of it as people couldn’t really believe it happened and that 95% players allowed it to happen…..Pence wouldnt be bad after all this time. Look at these flags….these tweets something MUST BE HAPPENING ) i hope next time people will call out those. It almost seemed on purpose made real clear issues into Alex jones after his 12th beer and mushrooms

It's true, most critical thinkers snap out of it eventually and you will inevitably end up here, with a proper frame of mind, posting frogs and waiting for rapture...

Spergs too, sometimes miss the obvious no matter how shiny and flashy the truth arrows are.

Where I am at on a reckoning:

"Kaitlynn Tiffany", Yeah she most likely under 25. Also, is the Atlantic going to be the very last so called news outfit to finally admit this isn't a theory any longer?

Just Googled her picture. Do not recommend, very disappointed.

There was an old Dennis Miller bit, I don't remember whom it was about but he would say

"if she was the last thing standing between me and the door at closing time, I would be buying a copy of 'SWANK' magazine on my way home"

And then he would toss it in the local forest for us kids to find!

Always seemed to be High Society and Mayfair around here.

Club magazine and Hustler here! In 11th grade, my friend found a VHS tape in the woods that for the movie "Ginger Lynn and the Ink Spots," but I just googled it and there was nothing, so maybe that was someone's own title. But anyway, chicks with those LONG asses sure were popular in the '80s:

Well i'd let her blow me, that would keep her from talking that liberal bullshit!

She's one of those "The Future Is Female" cunts. She'd pretend to try to kiss you, then spit it in your mouth.

If you've fucked a stabby, you have AIDS. No joke.

Sooo not a stripper?

Nah. She looks almost like a tranny, but she's not trying hard enough to look like a woman.

She is a fucking Brooklyn millennial obsessed with the band One Direction. Need I say more.

"i despise the united states of america" -Kaitlyn Tiffany, June 3 2016

Nice fake name, btw, one look at her tells the whole story

I guess she didn't get the memo that no one believes cunts like her anymore except people who don't even matter in this life.

Got her name the same place Chuck Todd got his

Can wait to see this article along side a twitter post discussing how the author died unexpectantly and suddenly at such a young age...

How sad, boo hoo, fuck you.

Thought exactly this when I saw it stickied....that will be another sticky in a couple months after she gets her 4th or 5th boosty. What number are these morons up to now!?

Useful for quite a lot of discussions these days.

Perhaps if the vax pushers immediately renounced their evil drug pushing ways, they may be spared the curse of #diedsuddenly.

Funny how they can’t have an open discussion and refute it with obvious points if they’re so unquestionably right.

It’s all so tiresome.

I'm surprised more people aren't noticing the point that, "it is trending" where "it is not being shut down."

Meaning that the topic is much more common, but censored where it can be done.

Where was the outrage over anti-natural immunity conspiracies?

Pretty sure Alex Jones said that The Atlantic is a globalist publication so I doubt they wanted the NPCs to get that update.

"What's your solution then?"

One look at...her...and I can almost guarantee she did.

Reported for wishing death and serious threats of harm.

(Seriously though. I can't wait for THAT npc update. The one where "I hope you get three boosters" is reported as a death threat, running simultaneously alongside the "the boosters are 10000% safe bigot" firmware.)

I'm getting tired of this strawman.

That grand irony is that the past 3 years of gaslighting have created more antivaxxers than the cumulative efforts of all antivaxxers over the last 40 years combined.

I think that might have been part of the plan.

"HOW DARE YOU ALLOW JOURNALISM REEEE."

See New Twitter does have an answer for Died Suddenly, it's called actual science that is censored by big tech and big pharma and shills should be strung up on lampposts for ignoring it.

Conspiracy Theories have been 18-0 the last 3 years. The state media’s dismissive approach to burying the truth is pathetic, and anyone who believes them is worthless.

Exactly. “Conspiracy theorist” at this point just means “critical thinker”. It has lost all power.

Coming from the paper that pushed for covid amnesty. Wompwomp

Looking forward to the family announcement that Kaitlyn's vaccine did it's job.

My usual response to those people is "I hope your boosters work as intended" basically. Fuck off and die. But some get it. some dont.

I was banned from Twitter today for replying to Kamala Harris. She said God's cool with you killing your baby and I replied "The Whore of Babylon has spoken."

If you’re not alarmed by a large number of people suddenly dying, then you are brainwashed and or in on it

She writes in her article 'people will always die suddenly'. No bitch, other than old people no one dies suddenly. The human body is not retarded to just randomly die for no apparent reason.

Anyone else smell pumpkin spice, obscene college debt and shame?

She won't be around long anyway.

Umm sorry sweaty, but they're a private company and they can do whatever they want.

The insanity of it all is tiring.

You could counter it with scientific evidence that there hasn't been a surge in sudden deaths, or that they're caused by something else. I'll wait.

HAHAHAHA! This is great entertainment. Thank you, Elon!

John 10:17 chapter 10 verse 17, Therefore doth my Father love me, because I lay down my life, that I might take it again.

They have a right to talk about it, even if it turns out to be wrong. We need all the cards on the table.