TheDonald
Communities Topics Log In Sign Up
Sign In
Hot
All Posts
Settings
Win uses cookies, which are essential for the site to function. We don't want your data, nor do we share it with anyone. I accept.
DEFAULT COMMUNITIES • All General AskWin Funny Technology Animals Sports Gaming DIY Health Positive Privacy
1438 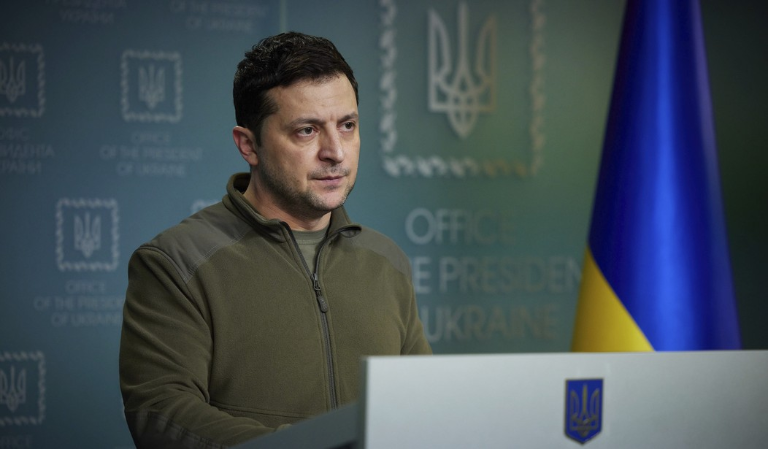 He resigned…after several tens of millions of our money were funneled to his bank.

Scapegoat. If they weren't afraid he'd finger the rest of them too, they'd refuse his resignation and order him to "lead from the front".

Next comes the helicopter crash.

Or he was threatened with helicoptering, like the interior minister.

Corruption in Ukraine?. Nahhh can't be, let's send them another $50 Billion just to be sure

legalize grift, tax it and cap it

down 40% from before we even out the gate, and that's not even counting the price spiking from Northrop Grumman, Raytheon, etc... who know money is coming their way.

We have to keep sending the money if we want to know for sure who is corrupt!

Kinda like elections - every two or four years we vote, they install the puppet, and now we know who can be bought and paid for.

Hope Russia defeats Ukraine ASAP, so we can stop sending them our money

I wonder how much money he has spent on different olive green tops.

That's how you know it's all fake. It's not like oh my worn torn country has no water to wash clothes so I'm just wearing this weird dark red shirt today... no. It's always the same amount of unshaven, the same length of hair, the same color (but notably different style) shirt. It's all such an act.

Imagine having the Russian army doing everything it can to head in your direction and you find the time to steal from your people.

*steal from our people.

You accidentally put a "y" in front of our.

That's the problem, though. The Russians AREN'T doing what they can to go after him. The Russians are, by and large, sticking to their plan for occupation and protection of the Russian-majority regions, and greatly not giving a shit about the rest of the country.

The Kiev and northern lines of advance in the early weeks of the Russian response were feints. And, not only were they feints, but they rapidly demonstrated the lack of integrated fire systems (and offensive air capability) that the Ukrainians had. Whole convoys exposed on main supply routes deep into opponent held territory, sitting there for days unmolested. Goes to show the lack of military capability Ukraine could field or redeploy.

It did its job, though, taking pressure off the Southern and South-Eastern fronts while troops and equipment were redeployed to protect what Zelensky thought was important. And, since the Russians have ALREADY demonstrated that they can almost go where they will, Ukraine can not afford to re-redeploy those troops and associated materiel back to the South.

Look for the next major offensive by the Russians to be preceded by the destruction of multiple Ukrainian Divisions. Kettling is in process in a number of sites along the front.

This armchair general thinks the Russians would go for Odessa next, to complete their land linkage to Transnistra(spelling?), and make Ukraine land-locked. But, that all changes with Leo 2s, Abrams, F16s and other wunderwaffe. The Russian occupied zones don't have enough depth to them to withstand concerted attack from the newer weapon systems coming in, so it would make sense for more of a push towards the Dnipr (Spelling?) to give them freedom and depth of manoeuvre behind the lines, out of reach of these systems.

Don't be surprised for another USS Liberty. Only, this time it will be Russians taking out a J-STARs or Rivet Joint and there will be less defence possible of them "just being there" not being active contributors to what's happening.

Yeah totally a feint and the Moskva is really a submarine. And that blitz ate up a lot of armor with a lot of javelins supplied by President Trump. You think because this disgusting corruption is apparent and the cause of the war is in office that we're your allies. You will find quickly when Trump is back in office that we serve our own interests and first. This does include peace and this does include trade. On our terms.

Moskva sank courtesy of OTHT provided by some unnamed Western nation. It was not a capability the Ukrainians had after losing their fleet. The missiles could still reach, but they had no target discrimination / ID until that information was provided by somebody else.

Javelins weren't really a concern or a threat to those exposed convoys at the time, and the ACTUAL versus CLAIMED losses of armour seem to be somewhat different. If you believe that propaganda so hard, why aren't you over there, marching through the sunflowers into Donetsk, leading an International Brigade to victory for the poor and downtrodden (and completely innocent) Ukrainians?

Maybe you should stop huffing your own farts for two seconds and look at my national identity before spiralling off into fantasy about who or what you think I am. Australia has been allied to the US for far, far more than could be said back in the other direction. The ANZUS treaty is one of very few extant alliance documents in global geopolitics.

Disgusting corruption has been present in Ukraine for decades. I don't know why you're suddenly concerned about it now.

President Trump told Putin he'd blow a minaret off the Kremlin if he fucked with Ukraine. I look forward to him taking office again to continue that discussion. I also look forward to not having to read all these fucking shills all the time. Did they give you gpt3 now or something? As if I asked for an essay filled with bullshit rhetoric from a piece of trash that is happy people are being slaughtered.

I genuinely hope they send you to the front.

Hey, Captain cocksucker. Tell Crenshaw it's your turn at the gloryhole.

Unlike you, I have stood on the front. I have served my nation with honour. Maybe when your balls drop and you are capable of growing facial hair you can do the same and stop hiding behind your mother's skirts.

You can turn a blind eye all you like to what is going on, and pretend you know what Trump said or did, or even build a strawman that looks nothing like me but yet you ascribe intent and outcomes to it that was never said. No death in a combat zone is pretty, or desired.

I don't believe you after what you wrote in defense of what our President considers an adversary and a national security threat. Write what you want, your words sunk you already.

I'm not asking you to believe me. And I don't fucking care. And neither does reality.

Take a looooooooong look at what I wrote, combined with how the forces are disposed on the ground in Ukraine. And how they have been disposed. And ignore whatever meddling outside nations have done / said they've done / said is going on. Then get back to me.

I've been carried into battle on the drums of war beaten by people like you. And guess what? I hated those who beat the drums more than the poor sap I was up against. At least he and I understood what the likely outcome was going to be for at least one of us.

The 88% Christian population of Ukraine suffered a Bolshevik election coup like we did in 2020.

The whole of Ukraine, is a milspec USFed money laudering churn. Firing the "defense minister" of such, is like removing a fly from a 19-day old bloated buffalo carcass, in the middle of the slaughtered millions of dead dead 19th century midwest savanah Buffalo...

They are doing this all over the world. Caribean, Virgin Islands, Central American, all the way to Isreal, Saudi, and Cypress, to name a few.

If they're not executed, I don't buy it.

Elites letting their more useful minions escape before the local nukes start going off? They're way up on the nuclear escalation ladder, step 20 out of ?.

The scary part is- Ukraine, one of the most corrupt countries in the world seemingly held some politician accountable for corruption. Like 80% of our government including the president are openly corrupt and 0 resignations. We are more fucking corrupt than that Ukraine shithole.

He wasn't sacked over corruption, something else is going on.

We don't need no stinkin' resignations! WE NEED HANGINGS!

Plot Twist - It wasn’t enough corruption. Zelensky gave everyone a target of 50% corruption with 10% to the big guy. This guy only managed 20% and was fired for underperforming the entire Ukrainian government.

BROVARY, Ukraine — Ukrainian Interior Minister Denys Monastyrsky and a child are among at least 14 people who died in a helicopter crash ...

Lol, so obvious a scapegoat. Now Zalenskyy can pretend Zalenskyy is squeaky clean but this guy was the problem.

Everyone in the west is corrupt.

I love how its falling apart

look at the hook on that fuckin weasel. He looks like the Penguin from Batman Returns

Hey now he was watching his men die on the battlefield, do you blame him for trying to get what they all deserve. They are like (insert pop culture umm lets say fighting orcs ) brave thems that they are. Slava Ukraine 🇺🇦

Toss Zoolinsky in a lake and see if he floats. If he does, he's a witch. If he drowns he's a criminal. What do we do with witches? 🔥

I met some young Ukrainians girls today who said zelenski was a national hero. Unreal

UKRAINIAN MINISTER FIRED FOR NOT BEING CORRUPT ENOUGH.

was his name Bagman, Patsy, or Usefull idiot?

Total fall guy. It’s very convenient for this to happen so shortly after the new republican congress said that there will be no more funds until an audit is completed. All the unaccountable money will be blamed on this guy and weak republicans will accept this as the truth and send them more of our stolen money.